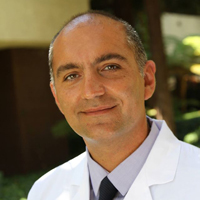 Specialty:
Surgery, Vascular
Department Affiliation:
Surgery
State License:
A68655
Phone:
310-373-6864
Status Category
This physician is an affiliate of the UCLA Medical Group but is not employed by UCLA.

Dr. Kaviani grew up in Newport Beach, California, and after graduating from high school, moved to the east coast where he attended the University of Pennsylvania. He completed his undergraduate studies with honors in 1992, and attended medical school at Boston University. He completed his residency in general surgery at Yale University School of Medicine in New Haven, Connecticut in 2004.

Dr. Kaviani completed a compulsory two-year research component of his general surgery residency at Harvard Medical School. His work focused mostly on stem cell isolation and tissue engineering. At the completion of his general surgery residency, Dr. Kaviani left for the Cleveland Clinic Foundation to complete a fellowship in vascular and endovascular surgery, training with some of the leaders in the field. During this two year fellowship, he participated in over 900 major vascular operations. Dr. Kaviani was recruited to join the Association of South Bay Surgeons in 2006. His interests include open and endovascular aortic aneurysm repair, as well as endovascular peripheral interventions, including carotid stenting. He is board certified in general surgery and vascular surgery. Dr. Kaviani has authored over 30 peer reviewed publications and 12 book chapters. He currently serves as the Chief of Staff at Providence Little Company of Mary Medical Center in Torrance, CA.

Amir Kaviani, MD click here to update your profile
Back to search