Researchers found that pembrolizumab appeared to be more effective than chemotherapy 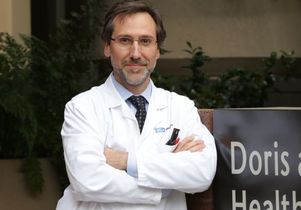 UCLA researchers have found that the immunotherapy drug pembrolizumab produces positive responses that are long-lasting and with fewer side effects than traditional treatments in people with advanced melanoma, the deadliest and most aggressive form skin cancer.

The study, published online in the journal JAMA Oncology, is a long-term follow-up of the phase 1 clinical trial that led to the approval of pembrolizumab by the Food and Drug Administration. The trial is the largest ever conducted in people with advanced melanoma, said Dr. Antoni Ribas, a professor of hematology and oncology, and director of the UCLA Jonsson Comprehensive Cancer Center Tumor Immunology Program.

“The early data from this research showed the unprecedented activity of pembrolizumab in people with advanced melanoma, and we can now report the full results of the study,” Ribas said.

Pembrolizumab (marketed as Keytruda) is a targeted therapy known as a checkpoint inhibitor. The drug is an antibody that blocks a protein called PD-1 that is expressed by immune cells. PD-1 puts the immune system’s brakes on, keeping T cells from recognizing and attacking cancer cells. Pembrolizumab releases the brakes from the body’s immune system which allows it to attack the cancer cells.

Ribas and his team analyzed data from 655 people who were treated with three dosing regimens of pembrolizumab. There were no differences among the dosing regimens, and overall the administration of the drug resulted in objective tumor regressions in 33 percent of patients. Among patients who were not previously treated for advanced melanoma, the objective tumor regression rate was 45 percent.

Toxicities were low, with 14 percent of patients having clinically significant toxicities, and only 4 percent had to stop treatment due to side effects. The great majority of responses were also highly durable, with 74 percent continuing beyond one year and up to over three years.