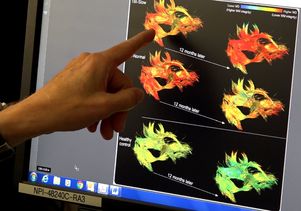 A new biological marker may help doctors identify children at risk of poor outcomes after a traumatic brain injury, UCLA scientists report in a preliminary study.

The discovery, published in the online issue of the medical journal Neurology, will allow researchers to zero in on ways to prevent progressive cognitive decline seen in roughly half of children with moderate to severe traumatic brain injuries.

“It’s really very hopeful. It means there’s something we can do about this,” said Robert Asarnow, the study’s senior author and the Della Martin Professor of Psychiatry in the UCLA Department of Psychiatry and Biobehavioral Sciences. “If we understand which kids are showing this neurodegeneration and why, then it’s possible to start using existing treatments to forestall this process or identify new ones to forestall this process.”

The study involved 21 children with moderate to severe traumatic brain injuries who were treated in hospital intensive care units in Los Angeles County. Causes of injuries included auto-pedestrian accidents, motor vehicle accidents, and falls from bikes, scooters and skateboards. The children, ages eight to 18, were assessed twice — two to five months after injury, and again at 13 to 19 months post-injury. The results were compared with children of the same age who had not had a brain injury.

Traumatic brain injury is the leading cause of disability and death in children and adolescents in the United States, according to the Centers for Disease Control and Prevention. Researchers at UCLA and elsewhere have observed that after children sustain a moderate to severe traumatic brain injury, they typically follow one of two trajectories — either steady gains toward normal, pre-injury functioning, or progressive, widespread cognitive decline.

Researchers, however, have been unable to predict, early on, the outcomes. The likelihood of poor outcomes is not immediately apparent; in fact, studies have shown that brain damage visible on a CT scan does not accurately predict a patient’s potential for full recovery. It’s only later, often after the child returns to school, that parents start noticing the child is falling behind or has problems with attention, learning or depression.

“While the severity of the injury certainly plays a role in this, there’s still a lot of uncertainty — you frequently have two patients with similar injuries who have different recoveries,” said Emily Dennis of the University of Southern California and first author of the study.

To detect which individuals might be at risk for ongoing cognitive decline, a team of researchers from different medical specialties used special MRIs and electroencephalograms, or EEGs, to measure the speed of brain signals passing from one hemisphere of the brain to another, a measure of brain function. Previous studies have shown that both children and adults have slow signal transfer times right after a traumatic brain injury.

In the first assessment, the children wore headphones and watched a movie while the MRI scanner assessed the integrity of the brain’s white matter, which connects different brain regions to support cognitive functions. The children also took tests of attention and memory skills.

Researchers suspect a prolonged, inflammatory process may be the culprit, causing ongoing damage to the still-maturing brain. Anti-inflammatory agents might alter this course, Asarnow said. But these agents may have some adverse effects.

“You don’t want to give these drugs unless you have a pretty good assurance that they would work,” Asarnow said. “We don’t have enough evidence right now to make that leap.”

The study was small and the results need to be confirmed in larger studies, the researchers noted.

The study was supported by the National Institutes of Health, the UCLA Brain Injury Research Center, the UCLA Steve Tisch BrainSPORT Program, the Easton Foundation and the UCLA Staglin IMHRO Center for Cognitive Neuroscience.