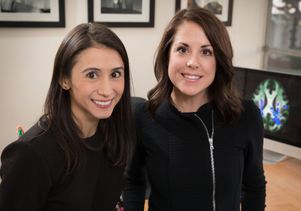 Some people disturbed by the 2016 presidential election have suffered a loss of appetite, trouble sleeping and concentrating, and have become easily annoyed, while others equally disturbed by the election result have not experienced such symptoms of depression. A new study by UCLA psychologists explains the differences between these two groups.

Those who had no symptoms of depression had either strong family support or heightened activity in two key regions of the brain’s reward system: the nucleus accumbens and the medial prefrontal cortex.

“This is the first study to show this buffering effect of the brain works for events that are political in nature,” said senior author Adriana Galván, UCLA associate professor of psychology and a member of UCLA’s Brain Research Institute.

The researchers brought in their first study participant on Dec. 9, 2016, one month after the election, and the study lasted through March 2017. The research is published online today in the Journal of Neuroscience.

Galván and Sarah Tashjian, first author and a UCLA doctoral student in psychology, evaluated 60 people from Los Angeles in two groups and conducted functional magnetic resonance imaging brain scans at UCLA’s Staglin Center for Cognitive Neuroscience. The first group (the “affected” group) had 40 participants who were disturbed by the presidential election and thought they would be personally harmed by Donald Trump’s presidency. A second, control group consisted of 20 people who thought they would not be affected much by the election result.

In the first group, 23 percent of those participants reported at least moderate depression, which was related to distress about the election result. The remaining 77 percent did not and were protected by either heightened activity in the brain’s reward system or a high level of family support, the researchers report. In the control group, depression symptoms were not linked to the election result.

The nucleus accumbens responds to rewards, such as winning money and receiving dessert, and helps to protect people from psychiatric symptoms, as well as from depression, previous research has shown. People who deal with depression seem to have a harder time activating this region, even during what would normally be rewarding activities, said Galván, who holds the UCLA Jeffrey and Wenzel Term Chair in Behavioral Neuroscience. The medial prefrontal cortex is active when people think of others and how they fit in with them.

The researchers studied how active the reward circuitry of their brains was when anticipating and receiving money to learn whether there were differences between the two groups in the key brain regions. In one part of the study, all participants were told they could earn money, which often activates the regions of the brain’s reward system. While they were in the scanner, the participants looked at computer monitors and had to respond quickly to a prompt by pushing a button. Sometimes they could win $5 or lose $5; other times they could win or lose 20 cents. The participants completed 100 trials in 11 minutes and were told immediately after each trial whether they won or lost money.

“We did not find group differences in their use of the nucleus accumbens or medial prefrontal cortex,” Tashjian said.

Participants who felt distress from the election were depressed only if they had little family support and a low response to reward in these two regions. The researchers found that support from family, but not support from friends, shielded them from symptoms of depression.

“They could be distressed by the election, but did not show psychological symptoms of depression if they have either strong family support or robust activity in these brain regions,” Tashjian said. “The ones who had more activation in these regions and more connectivity between the regions showed fewer symptoms of depression in response to the election than participants who had less activation in these regions, even if they were deeply disturbed by the election.”

A hallmark of depression, Galván said, is the inability to find activities and interests that are rewarding and that often help people cope with challenging times. Political events are not typically characterized as traumatic, but many of the concerns expressed by the affected participants in this study are similar to hallmarks of trauma, such as fear and helplessness, she said.

It’s unclear whether people can do something to boost activity of these key brain regions, especially as they age and their ability to heighten activity in these reward regions weakens, Galván said.

Every three months, the researchers have brought back the participants for further study, which includes asking them how closely they are following the news and how distressed they are feeling.

Galván’s broader research examines how the brain’s reward system changes as people age. She studies how the system helps people learn and protects them when things don’t go their way or when they experience something new, either positive or negative. Her laboratory has shown that teenagers who have greater activity in this reward system show fewer symptoms of depression a year later.