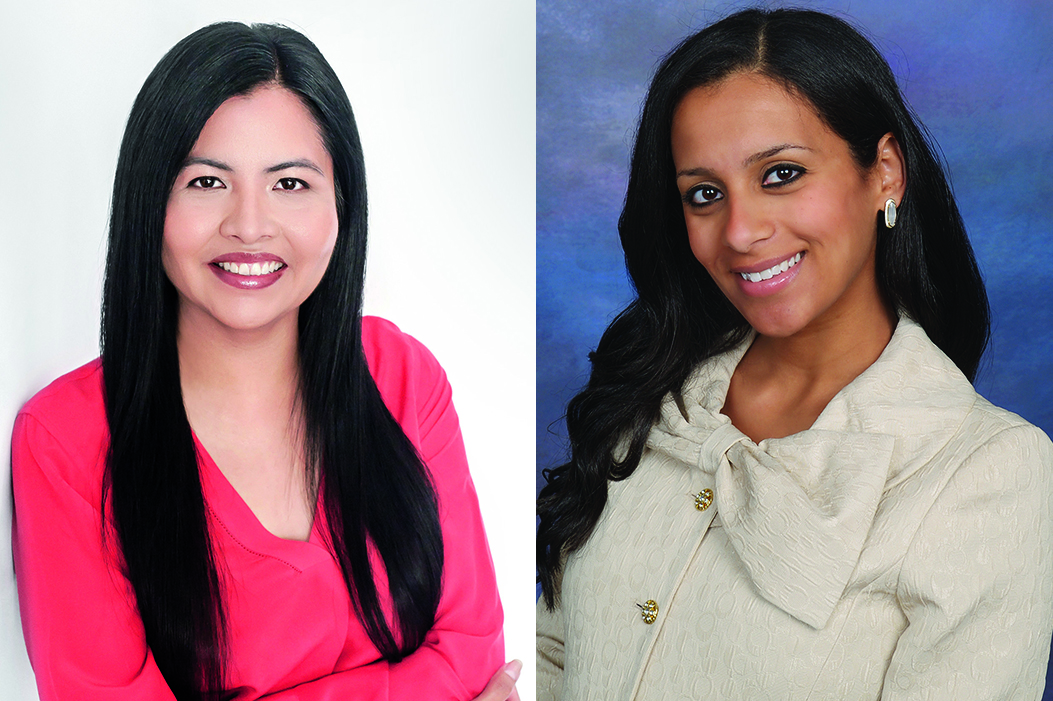 Professors Christine Samuel-Nakamura and Mary Rezk-Hanna have both received grants from the UCLA Academic Senate Council on Research.

This year, the UCLA School of Nursing welcomed two new faculty members who have taken unique journeys while, at the same time, sharing certain commonalities.

Christine Samuel-Nakamura and Mary Rezk-Hanna are new assistant professors. Both earned their doctorates at the UCLA School of Nursing. And each turned to her cultural background in choosing a field of research.

A member of the Diné (the indigenous name for Navajo) Nation, Samuel-Nakamura grew up on the Diné reservation in New Mexico, a world away from her future home of Los Angeles.

“It was very rural and we were close to the land,” Samuel-Nakamura said. “There were wide open spaces to explore and to play.”

The youngest child in a large family that raised its own food, Samuel-Nakamura gained a deep knowledge and appreciation of animal husbandry and agriculture. She raised livestock and helped her family raise crops that included “the Three Sisters,” beans, corn and squash.

As she got older, however, Samuel-Nakamura became more aware of the challenges facing her tribe, including poverty and chronic health problems, such as diabetes and cardiovascular disease. She decided to address these issues by becoming a nurse.

Samuel-Nakamura worked for several years in the clinical setting, both in the federally run Indian Health Service and in tribal hospital clinics. For part of this time, she worked on the Diné reservation in Arizona, where community elders appreciated that she could speak with them in their native tongue.

Although she enjoyed clinical practice, Samuel-Nakamura decided to pursue her Ph.D. in order to take a closer look at whether the environment was playing a role in the chronic health conditions she was seeing in the clinic setting.

This entailed focusing on the most common cultural foods, including locally raised sheep, crops, medicinal herbs and plants. As a result of her research, Samuel-Nakamura produced food guidelines and weekly intake recommendations.

“You can’t tell people they can’t eat or drink something, but you can put the information out there and encourage people to use safer food or water sources and manage their risk,” she said.

Samuel-Nakamura has received two one-year grants to re-evaluate environmentally contaminated sites in Los Angeles County. (Los Angeles County is home to the largest urban American Indian population in the United States.) One grant comes from the American Indian Studies Center in the UCLA Institute of American Cultures and the second is from the UCLA Academic Senate Council on Research.

Samuel-Nakamura feels she has come full circle, still connected to the agricultural roots of her childhood, while addressing the topic in a way that can positively impact the health of the greater community.

“Environmental contamination, which tends to occur in underserved populations, will be my focus going forward,” she said.

Mary Rezk-Hanna also found inspiration for her research program from childhood experiences. As a young girl growing up in Alexandria, Egypt, Rezk-Hanna recalls looking out from her fourth-floor apartment balcony to the street below and being fascinated by the popular hookah, which is a water pipe, cafe across the street.

Both of her parents were physicians and Rezk-Hanna spent childhood hours shadowing her parents as they treated patients. She was drawn to the medical field and, later decided to become a nurse.

Rezk-Hanna was 13 when her family moved to the United States. She earned her associate degree in nursing and worked as a registered nurse and became interested in the physiological effects of smoking in young adults with tobacco-related illnesses. She then obtained a bachelor of science in nursing from George Mason University to become more autonomous and to gain greater understanding of the physiological factors associated with smoking.

While pursuing her family nurse practitioner master of science degree at UCLA, Rezk-Hanna was selected by the California’s Student/Resident Experiences and Rotations in Community Health program to complete a five-week clinical internship. This required that she conduct a community research project about a local population health concern. She found that two of the largest hookah lounges in Los Angeles are within one mile of UCLA and are considered a major community health concern. While conducting an informal survey in Southern California hookah lounges, Rezk-Hanna noticed most customers were young adults, with a large proportion being females.

Rezk-Hanna then conducted a study to assess young adult hookah smokers’ attitudes, perceptions and beliefs toward their choice of smoking and to identify predictors of hookah smoking. She interviewed hookah lounge patrons to learn about their smoking habits. The study revealed hookah smokers mean age was 24, and 35 percent were women. Remarkably, the majority of subjects believed that hookah smoking is not harmful to one’s health. This belief was found to be an independent predictor of heavy hookah smoking (more than 3 times per week) versus light hookah smoking. This study was published in the journal Nursing Research.

“Young adults who use hookah see it as a social activity,” Rezk-Hanna said. “Those who engage in it don’t consider themselves to be ‘smokers’ and perceive hookah as a healthier alternative to cigarettes.”

Rezk-Hanna cautions that despite hookah smoke’s fruity, benign smell, hookah contains nicotine, one of the most addictive substances known, in addition to many toxins released from the burning charcoal used to heat the flavored tobacco. While cigarette smokers take about five to seven minutes to smoke a cigarette, hookah smokers often engage in smoking for hours at a time. Thus, they can be exposed to more smoke over a longer period than cigarette smokers.

To test if the cardiovascular effects of hookah smoking outweigh young adults’ perceived risk, Rezk-Hanna collaborated with the late Dr. Ronald Victor of the Smidt Heart Institute at Cedars-Sinai Medical Center and together they built a smoking chamber at Cedars-Sinai, an enclosed compartment which made it possible to measure acute smoking exposure in a controlled environment.

“These data could be used to inform young adults about the dangers of hookah smoking as well as provide evidence to guide policy specific to hookah and other alternative tobacco products and nicotine delivery systems,” Rezk-Hanna said.

Rezk-Hanna is building on her recent findings by studying other evolving hookah tobacco products and their effects on heart health. She has received three grants to investigate the potential cardiovascular toxicity of electronic hookah use among young adults: an R21 from the National Heart, Lung and Blood Institute, one from the UCLA Clinical and Translational Science Institute and one from the UCLA Academic Senate Council on Research.