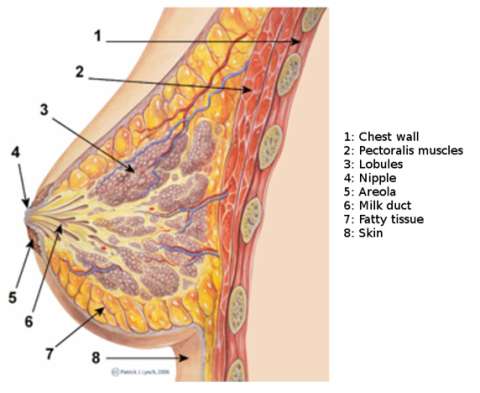 The breasts are glandular organs that play an important role in providing nutrients for developing infants and can succumb to various pathological diseases such as breast cancer. Understanding the anatomy of the breast is crucial for diagnostic breast imaging and surgical procedures.

The breasts extend from the second to sixth rib and are anchored to the pectoralis major fascia via the Cooper ligaments1. As the breasts mature and sag due to the stretching of the Cooper ligaments, they can further extend below the sixth rib. Horizontally, the breast extends from the side of the sternum to the midaxillary line, where the tail segment of breast tissue called the axillary tail of Spence resides2. The nipple is commonly located in the center of the breast, superior to the inframammary crease (the inferior fold made by the breast tissue), lateral to the midclavicular line, and at the level of the fourth rib1. The areola is a hyperpigmented, ovular area of skin that concentrically surrounds the nipple3. The nipple and areola together are referred to as the nipple areola complex (NAC), an anatomical classification important in surgical procedures such as mastectomies4. Posterior to the areola is the retro-areolar region, which appears as a triangular-shaped zone in mammograms and can potentially hide breast tumors5. The breast contains the mammary gland, which produces milk that is secreted through outlets in the nipple. The mammary gland is made up of glandular, adipose, and fibrous tissue. 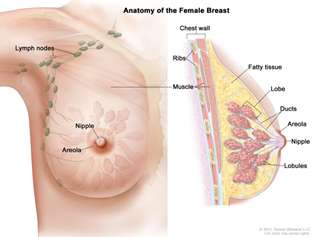 Each breast contains around 15-20 lobes surrounding the nipple in a radial pattern1. The lobes are comprised of lobules, which contain the alveolar clusters that produce milk through mammary secretory epithelial cells6. Each alveolar cluster is attached to a small duct, which drain into larger ducts and eventually the main duct for that lobe. This lobular duct then widens into a lactiferous sinus, narrows at the base of the nipple, and terminates at the surface of the nipple7. The terminal duct and lobule pairing is referred to as the Terminal Ductal Lobular Unit (TDLU). Although not visible in imaging, most breast cancers arise from TDLUs2. The glands appear radiopaque on mammograms3.

Adipose and dense fibrous tissue are interspersed between the lobes and around the breast1,3. The stroma in which these tissues occupy are divided into three regions: the subcutaneous part between the skin and gland, the intraparenchymal portion lying between the lobes and lobules, and the retromammary portion which is located behind the gland3. Cooper’s ligaments arise from the superficial layer of the subcutaneous superficial fascia and are suspensory ligaments that provide structural support to the parenchyma3. On mammographic imaging, the adipose tissue is radiolucent while the stroma appears radiopaque3. 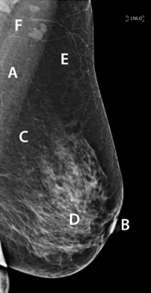 The blood supply to the medial aspect of the breasts are the internal mammary arteries, supplied by the internal thoracic arteries traveling along the inner surface of the anterior chest wall bilaterally. The internal thoracic arteries are supplied by the subclavian arteries. The lateral aspect of the breast is supplied by the lateral thoracic and thoracoacromial branches of the axillary artery, lateral mammary branches from the posterior intercostal arteries, and the mammary branch of the anterior intercostal artery. The blood vessels appear as thin, tortuous, linear opacities in mammograms and are more visible in breasts containing more adipose tissue3,8,9.

The venous drainage of the breast is divided into the superficial and deep veins. The superficial veins form the venous plexus of Haller, which runs deep to the nipple areolar complex and along the anterior surface of the fascia. The deep veins run along with the arterial supply of their respective region. They eventually drain into the internal mammary and axillary veins1,9.

As mentioned previously, the breast mainly sits anterior to the pectoralis major fascia and muscle. In mammograms, the pectoralis major muscle can be seen as a slightly radiopaque, linear structure located posterior to the breast tissue3. The sternalis muscle is a bandlike structure that runs longitudinally along the medial border of the sternum, bulging anteriorly as the patient is placed in the decubitus position and relaxes the muscle10. The sternalis muscle can be most clearly seen in the craniocaudal projection in mammograms as an irregular opaque body located medially to the breast10. Laterally, the external oblique muscle runs along the inferolateral edge of the breast while the rectus abdominis establishes the inferior border of the breast. Moreover, the serratus anterior runs along the lateral aspect of the chest wall and breast1.

The breast is supplied by the anterior and lateral cutaneous branches of the 4th through 6th intercostal nerves, which contain both sensory and autonomic nerve fibers. The lower cervical plexus also supplies some sensory innervation to the breast. The nipple areola complex is innervated by sensory nerves from the lateral cutaneous branch of T41,9. 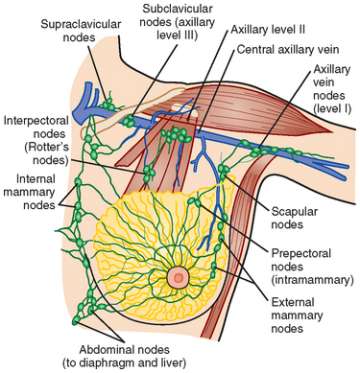