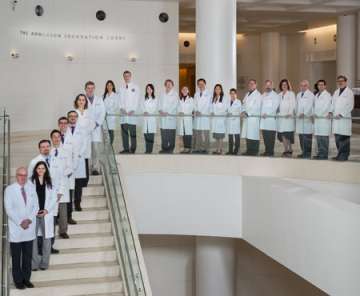 The remarkable advances and discoveries of modern-day surgery would suggest that the field has existed for ages. However, the history of modern surgery dates back only 150 years.

Inspired by the training of German surgeons during the 19th century, an influential group of American physicians pioneered a new system of formalized medical education. Under the leadership of William S. Halsted, MD, Johns Hopkins became the first institution to establish a  standardized education system for surgical training. The publishing of Henry Gray’s “Anatomy of the Human Body” laid the foundation for surgeons. With an understanding of the the internal structure of the body, surgeons now had a map to guide their actions.

However, the surgical profession was still limited by two major barriers: pain and infection.

Prior to the advent of anesthesia, surgery was a brutal and excruciating process. As a result, surgeons frequently had to prioritize feasibility over optimal health outcomes when deciding a treatment plan. In a landmark demonstration at the Ether Dome in Massachusetts General Hospital in 1842, Crawford Long introduced anesthesia in the form of an inhalable gas. For the first time, patients could receive life-saving procedures without unbearable pain. Anesthesia opened the doors to more complex and  procedures.

While intended to restore health, surgery proved to be life threatening for a subset of invasive procedures. This could be traced to microscopic pathogens, which are invisible to the naked eye. These bacteria are frequently transmitted through the use of unsterile equipment.

Foundational to the development of antispetics was an understanding of  germ theory. Our understanding of infection is largely derived from the work of Ignaz Semmelweiss, Louis Pasteur, and Joseph Lister:

Within the span of 150 years, surgery has become an integral method through which we maintain and restore health. This discipline has undergone considerable evolution over the past decade. The development of specialty training programs equip surgeons with the expertise to perform more intricate procedures. The six subspecialty areas within UCLA Division of General Surgery include:

The Division of Surgery at UCLA is only several ties away from the inception of surgery. Dr. William P. Longmire Jr., who served as chairman of UCLA Department of Surgery for 28 years, built one of the leading surgical departments worldwide and founded the UCLA School of Medicine. He completed his medical residency training under Dr. Alfred Blalock, the chief of surgery at Johns Hopkins. Dr. Blalock was was under significant influence of Dr. Halsted, one of the pioneers of modern-day surgery.