For many years, there has been limited interest within the medical field in how the brain and gut interact in health and disease. Even patients with common functional GI disorders such as irritable bowel syndrome (IBS), functional dyspepsia and functional heartburn were reluctant to accept such a concept, wrongly assuming their symptoms would be explained in psychological terms. The emerging research into the gut microbiome has dramatically changed the equation in the last five years, with the study of brain-gut microbiome (BGM) interactions taking center stage in many fields and specialties, including gastroenterology, cardiology, chronic pain and psychiatry, to name only a few.

Investigators at the G. Oppenheimer Center for Neurobiology of Stress and Resilience (CNSR) have been on the cutting edge of this research for several decades, being the first to study the role of the human brain in patients with IBS and in linking alterations in gut microbes to alterations in brain structure and function. Under the leadership of Dr. Emeran A. Mayer, a world-renowned gastroenterologist and neuroscientist with 30 years of experience and continuous NIH funding in the study of brain-gut interactions, center investigators are focusing on the role of the mind and of gut microbiota in modulating brain-gut interactions, including sex differences in these interactions; the effects of mindfulness-based stress reduction and cognitive behavioral therapy (CBT) on brain signatures in irritable bowel syndrome (IBS); brain-gut microbiome interactions in inflammatory and functional GI disorders; and the role of gut microbes in obesity. 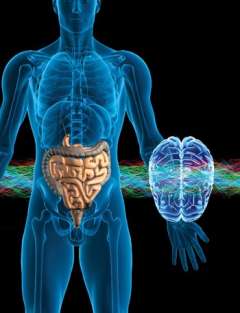 Dr. Lin Chang, one of the co-directors of the CNSR and board member of the ROME Foundation, and a key opinion leader on the treatment of IBS, has been studying the epigenetic mechanisms underlying the effect of early adverse life events, psychosocial stress and resilience on IBS symptoms. Her NIH-funded studies look at the role of micro RNAs and gene methylation in the IBS colonic mucosa.

Dr. Kirsten Tillisch is the head of the Integrative Medicine Program at the West Los Angeles VA and is nationally recognized in the use of integrative medicine approaches to treat brain-gut disorders. Dr. Tillisch was the first to demonstrate an effect of gut microbial manipulation with probiotics on emotional brain responses. Her current NIH-funded study is looking at the impact of mindfulness-based stress reduction on the brain and the microbiomes of IBS patients, and she is working with Drs. Bruce Naliboff and Mayer in studying the effects of CBT on IBS symptoms, the brain and the microbiome. Dr. Jonathan Jacobs, who directs the UCLA microbiome center core, is collaborating with several investigators in the CNSR on studies involving the gut microbiome, and is working with Dr. Mayer on the interactions of the brain and gut in patients with Crohn’s disease — a new area of IBD research based on the recognition that the brain is influenced by chronic gut inflammation, and may play a key role in modulating gut permeability, microbial behavior and the inflammatory activity in the gut.

Dr. Arpana Gupta is studying the role of BGM interactions in obesity and food addiction, and evaluate the mechanisms by which bariatric surgery and cognitive behavioral therapy affect weight loss in obese subjects.

Dr. Jennifer Labus, the director of the CNSR neuroimaging and bioinformatics core, has developed novel analytical techniques (“multiomics integration”) to analyze the interactions of gut microbes and their metabolites with the brain. By interacting with all investigators of the CNSR, she plays a crucial role in extracting relevant information from extensive sets of brain and gut microbial data using machine learning approaches. She also pursues NIH-funded studies into the role of the central nervous system and the vaginal microbiome in vulvodynia.

Dr. Elaine Hsiao, an assistant professor in the Department of Integrative Biology and Physiology who holds a joint appointment in the division and is internationally recognized as an expert in brain-gut microbiome interactions, is using a mouse model to study how microbes in the gut influence behaviors in conditions such as Parkinson’s and autism. “We’re seeing that changing the microbiome in the mice can produce substantial effects on their behavior, as well as differences in the structure and activity of the brain cells,” Dr. Hsiao says. “That is inspiring a great deal of effort to better understand what it is that bacteria or other microbes are doing to affect the brain, and how they communicate with each other.”

While at Caltech in 2013, Dr. Hsiao and her colleagues found that autism-like behavior could be produced in the offspring of mice they treated with a viral mimic during pregnancy. These offspring, which were found to have altered gut bacteria, showed reduced autism-like behaviors when treated with a health-promoting bacterium. Dr. Hsiao’s UCLA lab continues to follow up on those findings with studies of the impact of microbiome changes on behaviors related to autism and other neurological disorders, including depression, epilepsy and Parkinson’s disease. Her laboratory recently discovered that bacteria from human-gut microbiota stimulate host biosynthesis of the hormone and neurotransmitter serotonin.
In addition to studying the role of the BGM axis in functional GI disorders, several CNSR investigators are pursuing NIH-funded interdisciplinary studies into other chronic pain conditions, including urological pelvic pain syndromes such as interstitial cystitis and chronic prostatitis (Drs. Jason Kutch and Larissa Rodriguez), and vulvodynia (Dr. Jennifer Labus).

Through interdisciplinary collaborations among these researchers and experts from all over the UCLA campus, the CNSR has been a leader in the field of mind-body interactions related to gastroenterology, chronic pain and women’s health. “Our program is unique in the country in the way that it spans from basic science and animal models to clinical research, looking at the brain-gut microbiome axis as it is applied to different diseases in both humans and animals,” Dr. Mayer explains. Many of the above researchers are in the process of putting together an interdisciplinary translational program project grant that will be submitted to the NIH in late May, Dr. Mayer notes.