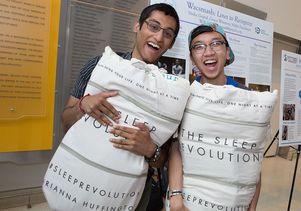 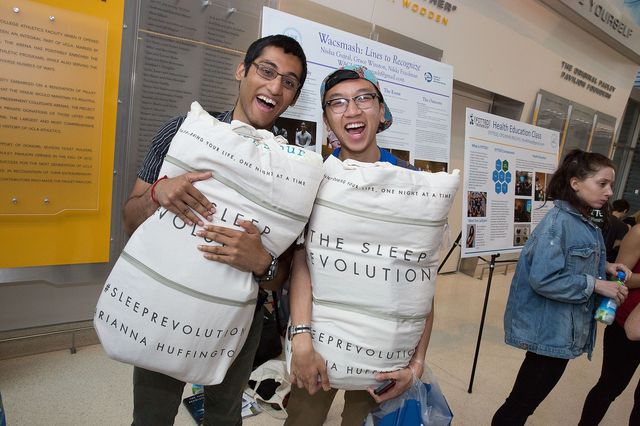 Who would have guessed that the subject of sleep could keep hundreds of UCLA students, staff, faculty and senior administrators wide awake into the evening, energized and cogitating on ways they might be able to catch more shut-eye at night?

The campus community gathered Wednesday night at Pauley Pavilion for an evening devoted primarily to sleep and heard sound advice about how to wake up refreshed and rejuvenated from a panel of experts that included Chancellor Gene Block, whose scientific research focuses on sleep and circadian rhythms.

The event, which also featured entertainment — some of it sleep-themed — by talented UCLA student musicians, dancers, gymnasts and vocalists performing acapella, was hosted by the UCLA Healthy Campus Initiative (HCI) and held to celebrate another year of programming and progress.

Launched in 2013, HCI is a cross-campus effort that promotes complete health and wellness for those who work and study at UCLA.

“In three short years, HCI has inspired the community to focus on topics and issues that affect healthy living … and take simple steps to live a more active and healthy lifestyle,” said Chancellor Block to an audience that filled one side of Pauley Pavilion. 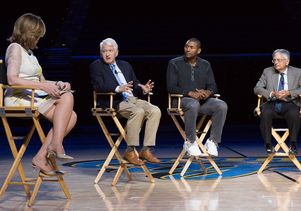 Block was later joined by Arianna Huffington, co-founder and editor-in-chief of the Huffington Post and an author of a new book on the subject, “The Sleep Revolution.”  Huffington, who is visiting campuses across the country to draw attention to the importance of sleep, moderated a discussion focused on the role that sleep plays in health, athletic performance, and academic and professional success.

Other panelists included Metta World Peace, Los Angeles Lakers forward and advocate for mental health and healthy eating; Jerry Siegel, director of the UCLA Center for Sleep Research and a professor of psychiatry and biobehavioral sciences; Danusia Francis, 2016 NCAA beam champion and a UCLA English major; Shelly Ibach, president and CEO of Sleep Number; and Hosain Rahman, founder and CEO of Jawbone, which makes a wearable device that keeps track of activity and sleep.

“The goal of the ‘Sleep Revolution’ campaign,” said Huffington, “is to change the culture around sleep, the idea that we must sacrifice sleep to be successful.”

When asked what we can do to further accelerate this cultural shift in valuing sleep, Block said education is key, especially for college students and young children who need sleep to add balance to their lives as they work toward their goals.

Basketball star World Peace said sleep is critical to his performance as a professional athlete. He shared that, although sleep was not a priority early on in his career, he eventually found that more rest equaled greater impact on the court.

“When I go to bed at 9 p.m. or 9:30 p.m. I perform better in practice, and I perform at least 30 percent better in a game,” he said. “Sleep is something that I use as a natural performance-enhancing drug.”

Tweet that out, Huffington urged students in response, eliciting laughter.

Bruin gymnast Francis agreed that sleep is critical for athletes and that she also tries to get to bed by 9 p.m. every night to remain in peak physical condition. She said she and her teammates try to rest as much as possible when they’re traveling, and they routinely track their shut-eye.

“Every morning, we write down how many hours we’ve slept,” the gymnast said.

The evening also featured student performances, books signings, a student research poster competition, giveaways, a reception and the announcement of the winners of the 2016 jane b semel Healthy Campus Initiative Appreciation and Recognition Awards. They honor UCLA students, faculty, staff and senior administrators for significant contributions to personal and institutional goals and objectives that promote health and wellness at UCLA. The awards are named for Semel, who, along with her husband, Terry, envisioned and supported the creation of HCI at UCLA.

The winners, along with highlights of their achievements, are: