How to stay healthy and happy through the decades

UCLA’s Alan Castel explains the psychology of successful aging in his new book, ‘Better with Age’ 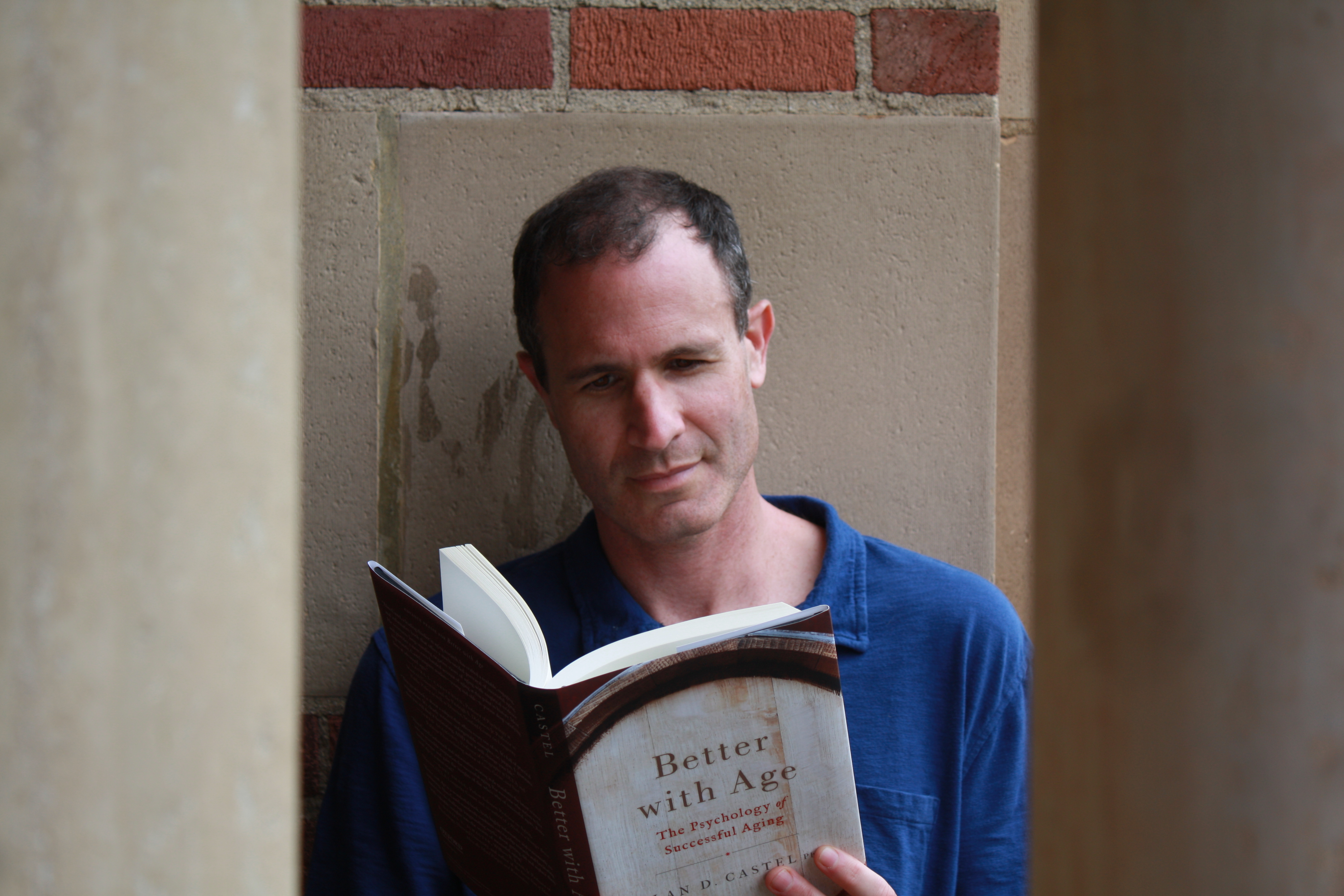 While some books focus on how to try to prevent or delay aging, in his book, Alan Castel shows how we can enjoy the benefits of old age.

Castel notes that architect Gehry designed conventional buildings and shopping malls early in his career, and decades later designed the creative buildings he would only dream about when he was younger. Others who did much of their best work when they were older include Mark Twain, Paul Cezanne, Frank Lloyd Wright, Robert Frost and Virginia Woolf, he writes.

“There are a lot of myths about aging, and people often have negative stereotypes of what it means to get old,” Castel said. “I have studied aging for two decades, and have seen many impressive role models of aging, as well as people who struggle in older age. This book provides both science behind what we can to do age well and role models of successful aging. While some books focus on how to try to prevent or delay aging, ‘Better with Age’ shows how we can age successfully and enjoy the benefits of old age. I have combined the lessons the psychology of aging teaches us with insights from some of the people who have succeeded in aging well.”

Castel cites a 1979 study by Harvard University social psychologist Ellen Langer in which men in their 70s and 80s went to a week-long retreat at a motel that was re-designed to reflect the décor and music from 1959. The men, who were all dependent on family members for their care, were more independent by the end of the week, and had significant improvements in their hearing, memory, strength and scores on intelligence tests. Some played catch with a football. One group of the men, who were told to behave like they were 20 years younger, showed greater flexibility, and even looked younger, according to observers who saw photos of them at the start and end of the week.

In another study, researchers analyzed Catholic nuns’ diary entries made in the 1930s and 1940s, when the nuns were in their 20s, and determined their level of happiness from these diaries. More than 50 years later, 75 percent of the most cheerful nuns survived to age 80, while only 40 percent of the least happy nuns survived to 80. The happiest nuns lived 10 years longer than the least happy nuns.

Happiness increases our lives by four to 10 years, a recent research review suggested. “As an added bonus,” Castel writes, “those additional years are likely to be happy ones.”

What are the ingredients of staying sharp and aging successfully, a process which Castel says can start at any age? He has several recommendations. 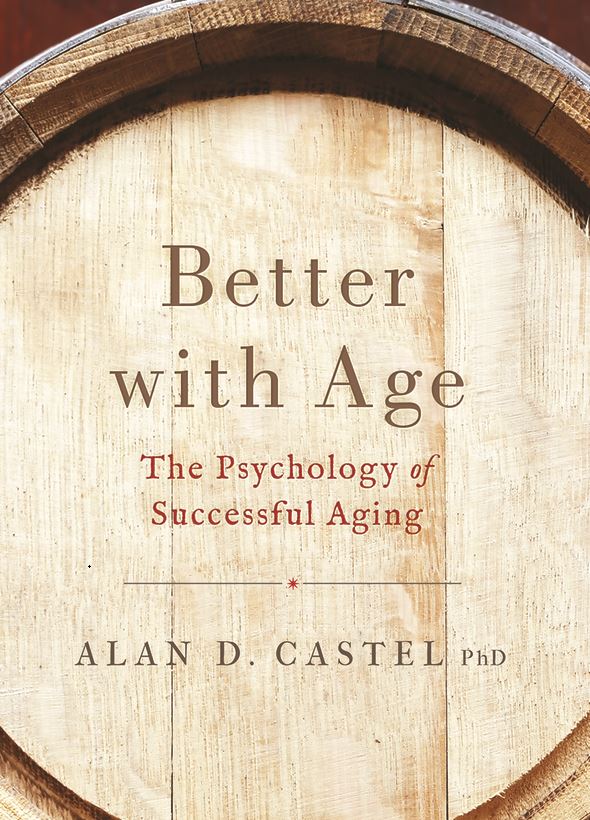 Walking or other physical exercise is likely the best method to ensure brain and body health, Castel writes.

In a large 2011 study, older adults were randomly assigned to a group that walked for 40 minutes three times a week or a stretching group for the same amount of time. After six months and again after one year, the walking group outperformed the stretching group on memory and cognitive functioning tests. Too much running, on the other hand, can lead to joint pain and injuries.

In addition, after one year, those who walked 40 minutes a day three times a week showed a 2 percent increase in the volume of the hippocampus — an important brain region involved in memory. Typically, Castel notes, the hippocampus declines about 1 percent a year after age 50. “Walking actually appears to reverse the effects of aging,” Castel says in the book.

Balance exercises are proven to prevent falls, can keep us walking and may be the most essential training activity for older adults, Castel writes. Each year, more than two million older Americans go to the emergency room because of fall-related injuries. A 2014 British study found that people who could get up from a chair and sit back down more than 30 times in a minute were less likely to develop dementia and more likely to live longer than those who could not. A good balance exercise is standing on one leg with your eyes open for 60 seconds or more, and then on the other leg. Those who did poorly on this were found in a study to be at greater risk for stroke and dementia.

Like walking, sleep is valuable free medicine. Studies have shown a connection between insomnia and the onset of dementia.

People who speak more than one language are at reduced risk for developing dementia, research has shown; there is some evidence being bilingual or multilingual can offset dementia by five years, Castel writes.

One study found that among people between 75 and 85, those who engaged in reading, playing board games, playing musical instruments and dancing had less dementia than those who did none of those activities. “Lifelong reading, especially in older age, may be one of the secrets to preserving mental ability,” Castel writes.

Set specific goals. Telling yourself to “eat healthy” is not very likely to cause a change; setting a goal of “eating fewer cookies after 7 p.m.” is better. Similarly, “walk four days a week with a friend” is a more useful goal than “get more exercise” and “call a friend or family member every Friday morning” is better than “maintain friendships.”

How can we improve our memory? When Douglas Hegdahl was a 20-year-old prisoner of war in North Vietnam, he wanted to learn the names of other American prisoners. He memorized their names, capture dates, methods of capture and personal information of more than 250 prisoners to the tune of the nursey rhyme, “Old MacDonald Had a Farm.” Today, more than four decades later, he can still recall all of their names, Castel writes.

Social connections are also important. Rates of loneliness among older adults are increasing and chronic loneliness “poses as large a risk to long-term health and longevity as smoking cigarettes and may be twice as harmful for retirees as obesity,” Castel writes. The number of Americans who say they have no close friends has roughly tripled in the last few decades. There is evidence that people with more social support tend to live longer than those who are more isolated, and that older adults who lead active social lives with others are less likely to develop dementia and have stronger immune systems to fight off diseases. “Staying sharp,” Castel writes, “involves staying connected — and not to the Internet.”

A 2016 study focused on “super-agers” — people in their 70s whose memories are like those of people 40 years younger. Many of them said they worked hard at their jobs and their hobbies. The hard work was challenging, and not always pleasurable, leaving people sometimes feeling tired and frustrated. Some researchers believe this discomfort and frustration means you are challenging yourself in ways that will pay off in future brain and other health benefits.

Research has shown that simply telling older adults they are taking a “wisdom test” rather than a “memory test” or “dementia screening” actually leads to better results on the identical memory test, Castel writes.

If you are concerned about your memory, or that of a loved one, it may be wise to see a neurologist, Castel advises.

Castel, 42, said he is struck by how many older adults vividly recall what is most important to them.

As Castel quotes the Roman philosopher and statesman Cicero: “No old man forgets where he has hidden his treasure.”

Health and Behavior
Some types of prostate cancer may not be as aggressive as originally thought
06/04/2020
Research brief: Findings from a UCLA study indicate some men may not require the intensive treatment they have traditionally received.

Health and Behavior
A Collective Response
06/03/2020
We are in a period of shock and grief over the tragic death of George Floyd. At this incredibly challenging time, please see a collection of statements reflecting our unwavering support for our patients, students, faculty, staff, and the entire UC community.

Health and Behavior
Health Resources to Support Our Patients & Community as We Process Our Grief
06/03/2020
It is with a heavy heart that I am writing to you today. The tragic death of George Floyd has resulted in an emotional reaction heard around the world. As we all process our collective grief, I want to ensure you that patient care and community healing are our top priorities.