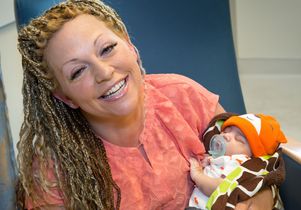 Staff at UCLA Mattel Children's Hospital witnessed a happy ending today instead of what could have easily been a tragic one  when they bid farewell to five-week-old Dravyn Johnson, who went home with his mother, Nicole Eggleston, and two older brothers after becoming the hospital’s second youngest heart transplant recipient. He was only 23 days old when he received his new heart, which was the size of a strawberry.

“All of our heart transplant patients are special, but I think this one was special because we knew there was a risk we might not find a donor in time,” said Dr. Juan Alejos, professor of pediatric cardiology and director of the Pediatric Heart Transplant Program at UCLA Mattel Children's Hospital

Dravyn was born with a condition called pulmonary atresia in which the pulmonary valve does not form properly. It was discovered during Eggleston’s pregnancy in a sonogram performed at 22 weeks. Doctors had thought initially that his heart could be repaired with a series of corrective surgeries performed over the first few years of Dravyn's life.

However, when he was born in early February at an Orange County hospital, doctors found that he had only one coronary artery instead of two and determined that surgery would be too risky for the baby.

At five days old, Dravyn was airlifted to Mattel where doctors confirmed that the only hope for his survival was an urgent heart transplant. Miraculously, within two days after Dravyn's name went on a list for a transplant, a donor was found. And Dravyn got his new heart. The hospital’s youngest heart recipient was a 16-day-old infant who received a transplanted heart in 1994.

The UCLA Pediatric Heart and Heart-Lung Transplant Program is one of the major referral centers for the Western United States.  The team has performed more than 300 pediatric heart transplants since 1984 when it did its first such surgery.  The program is a coordinated effort among pediatric cardiologists, cardiothoracic surgeons, dentists, nurse practitioners, transplant coordinators, nutritional specialists, social workers and child developmental specialists.   For more information, visit http://transplants.ucla.edu/heart.

The family has set up a website to help raise funds for Dravyn’s care.