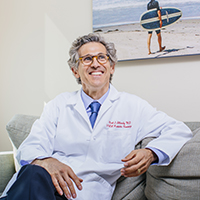 Mark S. Sklansky, M.D. is Chief of Pediatric Cardiology at Mattel Children's Hospital UCLA, Founder and Medical Director of the UCLA Children's Heart Center, Director of the UCLA Fetal Cardiology Program, Co-Director of the UCLA Congenital/Pediatric Heart Program, and Professor of Pediatrics within the David Geffen School of Medicine at UCLA. Dr. Sklansky received his B.A. degree in biomedical ethics from Brown University in 1984, and his medical degree from the University of California, Irvine School of Medicine in 1987. Dr. Sklansky then completed his internship and residency in pediatrics at Children's Hospital Los Angeles (1987-1990), followed by a fellowship in pediatric cardiology at Baylor College of Medicine in Houston (1990-1993). During this time, Dr. Sklansky pursued specialized, fetal cardiology training in Philadelphia, under the supervision of Dr. James Huhta.

Dr. Sklansky provides state-of-the-art, collaborative and compassionate evaluation and management of fetal and pediatric patients with a wide range of congenital and acquired forms of heart disease. He has served as Associate Editor of Pediatric Cardiology. Dr. Sklansky's primary academic interests focus in the area of prenatal detection, evaluation and management of congenital heart disease. He has served as Chair of the Section of Fetal Echocardiography in the American Institute of Ultrasound in Medicine, and has authored the chapter on fetal cardiac malformations and arrhythmias for the 3 most recent editions of Creasy & Resnik's Maternal-Fetal Medicine: Principles and Practice. Dr. Sklansky directs a highly successful, annual fetal echocardiography symposium at UCLA that attracts attendees from across the country, and he speaks frequently at academic meetings and workshops around the globe. He has published over 90 articles in his fields of interest, including fetal cardiology, general pediatric cardiology, biomedical ethics, and veterinary cardiology—including pioneering work in the field of transesophageal and fetal echocardiographic evaluation of the bottlenose dolphin.

Fetal Heart Screening | What You Need to Know