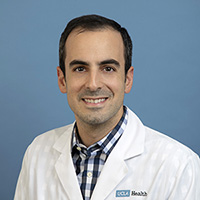 Roberto G. Gallotti, MD is a Pediatric Cardiologist and Electrophysiologist who joined the UCLA School of Medicine faculty in 2019. His primary clinical role is split between caring for any pediatric patient with cardiac needs in the hospital, as well as caring for children with arrhythmias requiring electrophysiology studies, ablations, or pacemakers.

Dr. Gallotti earned his B.A. in French and biology from Washington University in St. Louis (2008) and his Medical Degree from Wake Forest University School of Medicine (2012). After completing his pediatric residency at UCI-CHOC, Dr. Gallotti continued his fellowship training at UCLA, where he also completed his sub-specialization in pediatric electrophysiology. He is board-certified in Pediatrics and Pediatric Cardiology by the American Academy of Pediatrics.

Outside of work, Dr. Gallotti is active in philanthropic work with Camp Del Corazon and Hearts with Hopes. He has been on numerous trips to El Salvador and Peru to perform electrophysiology studies and ablations on children with arrhythmias.