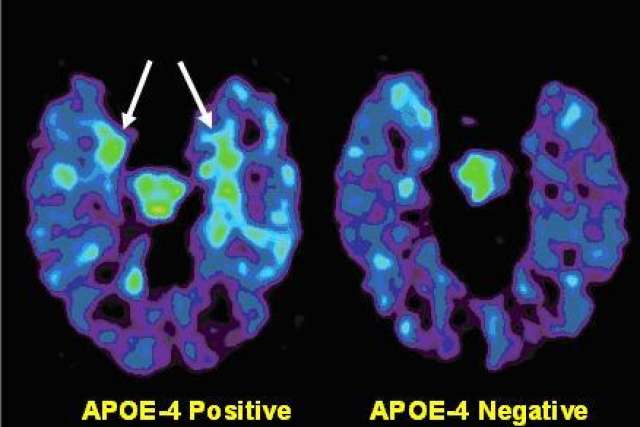 UCLA scientists have used innovative brain-scan technology developed at UCLA, along with patient-specific information on Alzheimer's disease risk, to help diagnose brain aging, often before symptoms appear. Published in the January issue of Archives of General Psychiatry, their study may offer a more accurate method for tracking brain aging.

Researchers used positron emission tomography (PET), which allows "a window into the brain" of living people and specifically reveals plaques and tangles, the hallmarks of neurodegeneration. The PET scans were complemented by information on patients' age and congnitive status and a genetic profile.

"Combining key patient information with a brain scan may give us better predictive power in targeting those who may benefit from early interventions, as well as help test how well treatments are working," said study author Dr. Gary Small, who holds UCLA's Parlow-Solomon Chair on Aging and is a professor at the Semel Institute for Neuroscience and Human Behavior at UCLA.

Scientists took PET brain scans of 76 non-demented volunteers after they had been intravenously injected with a new chemical marker called FDDNP, which binds to plaque and tangle deposits in the brain. Researchers were then able to pinpoint where these abnormal protein deposits were accumulating.

They reported that older age correlated with higher concentrations of FDDNP in the medial and lateral temporal regions of the brain, areas involved with memory, where plaques and tangles usually collect. The average age of study volunteers was 67.

Thirty-four of the 76 volunteers carried the APOE-4 gene allele, which heightens the risk for developing Alzheimer's disease. This group demonstrated higher FDDNP levels in the frontal region of the brain, also involved in memory, than study participants without allele.

"We found that for many volunteers, the imaging scans reflected subtle brain changes, which take place before symptoms manifest," said Small, who is also director of the UCLA Center on Aging.

Small noted that the brain will try to compensate for any problems, which is why cognitive symptoms may not become apparent until much later.

"This type of scan offers an opportunity to see what is really going on in the brain," he said.

"We could see more advancing disease in those with mild cognitive impairment, who are already demonstrating some minimal symptoms," Small said. "Eventually, this imaging method, together with patient information like age, cognitive status and genetics, may help us better manage brain aging."

According to Small, in the future, brain aging may be controlled similarly to high cholesterol or high blood pressure. Patients would receive a brain scan and perhaps a genetic test to predict their risk. Medications and other interventions could be prescribed, if necessary, to prevent or delay future neurodegeneration, allowing doctors to protect a healthy brain before extensive damage occurs. The brain scans may also prove helpful in tracking the effectiveness of treatments.

PET, combined with the FDDNP probe, is the only imaging technology that offers a full profile of neurodegeneration that includes measures of both plaques and tangles — the physical evidence of Alzheimer's disease in the brain.

"The fact that we can see tau tangles as well as amyloid plaques is critically important in early detection of brain aging, since the tangles are the first abnormal proteins that appear in the brain, long before dementia is clinically obvious to the physician," said Dr. Jorge R. Barrio, a study author and professor of molecular and medical pharmacology at the David Geffen School of Medicine at UCLA.

Such subtleties allow more insight into how the plaques and tangles spread and ultimately how Alzheimer's disease may develop.

Currently, the new FDDNP-PET scans are used in a research setting, but clinical trials are in development to bring the technology to wider patient use.

The study was funded by both government and nonprofit agencies, including the National Institutes of Health, the U.S. Department of Energy, the Ahmanson Foundation, the Larry L. Hillblom Foundation and the Tamkin Foundation.

UCLA is California's largest university, with an enrollment of nearly 38,000 undergraduate and graduate students. The UCLA College of Letters and Science and the university's 11 professional schools feature renowned faculty and offer more than 323 degree programs and majors. UCLA is a national and international leader in the breadth and quality of its academic, research, health care, cultural, continuing education and athletic programs. Four alumni and five faculty have been awarded the Nobel Prize.