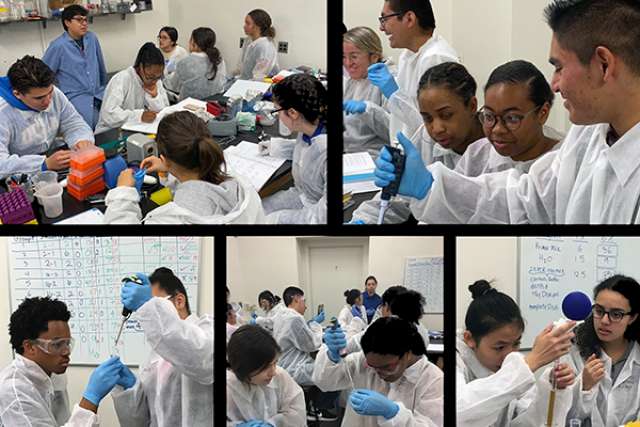 Over the years, the pathways program has enrolled more than 125 students, who have taken on responsibilities as independent researchers, mentors, tutors and campus leaders.
February 1, 2021
Estimated read time: 4 minutes

When Tracy Johnson was an undergraduate working in a lab at UC San Diego, she found herself suddenly jolted. Conducting research on gene function using fruit flies, she realized she was involved in something deeper and more fulfilling than a traditional classroom experience.

"The idea that I was learning things that nobody else knew, that I could make some contribution," says the dean of the division of life sciences in the UCLA College, "that was a game-changer."

Johnson, who holds the Keith and Cecilia Terasaki Presidential Endowed Chair in Life Sciences, joined the faculty of UCLA's Department of Molecular, Cell and Developmental Biology in 2014. Soon after, she was awarded a $1 million Howard Hughes Medical Institute grant to improve undergraduate science education, which was, in part, used to create the UCLA-HHMI Pathways to Success program.

Pathways gives students from diverse backgrounds an "authentic research experience, early on, and in a prolonged way." For years, Johnson said, students of color and those who were the first in their family to attend college pursued science, technology, engineering and math degrees at equal rates as other students but left STEM majors at a higher rate.

"It was clear that these statistics had less to do with preparation," she said, "and more to do with students not seeing themselves as part of a scientific community. Pathways was designed to rethink that."

The goal was to help students understand they belonged and had important contributions to make.

"The Pathways program has honestly opened up the world of research to me. I come from a normal public school in a mainly minority area, so I never knew what research truly entailed," said Venus Hagan, a second-year UCLA student majoring in molecular, cell and developmental biology and minoring in biomedical research.

Hagan noted how getting to do research as an undergraduate helped her discover her passion for it. "Without the program," she said, "I may have never considered minoring in biomedical research and possibly applying to MD/PhD programs in the future."

In building the program, Johnson looked around the country to find what worked best, and bring it to UCLA. She was interested not just in lab work, but in mentoring as well.

Pathways students participate in a lab course dedicated to Johnson's field, gene expression. The DNA in every cell of a given plant or animal is identical. Expression is the process by which genes, or specific segments of DNA, get turned on. This process allows cells to perform specific functions. For example, this process can tell a cell to become part of a muscle or part of the brain, and so on.

"It's a lot for first-year students to dive into," Johnson acknowledged. "They're freshmen, on campus for barely 10 weeks when they start. Some students have never taken AP biology. It is ambitious, but they rise to the occasion."

Second-year student Nyari Muchaka said enrolling in Pathways was one of the best decisions she has ever made.

"The program has provided me with multiple opportunities for summer and during the year research opportunities, and allowed me to find a group of friends I resonate with," said Muchaka, who is majoring in molecular, cell and developmental biology and minoring in biomedical research. "Everyone is truly there to help each other which makes it one of the most fulfilling, enriching parts of my college experience. The program helps advance your interest in the biological field but also carry you through some of the best and roughest four years of your life. Pathways is truly an innovative program and provides a foundation for college studies you won't find anywhere else."

Johnson and her co-instructor and research collaborator, Azad Hossain, are preparing to publish some of the student research in an academic journal within the next year. Pathways has enrolled more than 125 students, and these students have taken on more and more responsibility as independent researchers, mentors, tutors and campus leaders as the years have passed. Many have gone on to doctoral programs, medical school, MD/PhD programs, and a host of other STEM-related careers.

"There isn't anything quite like what we do," Johnson said. "I think it's a model for how to think about student success."