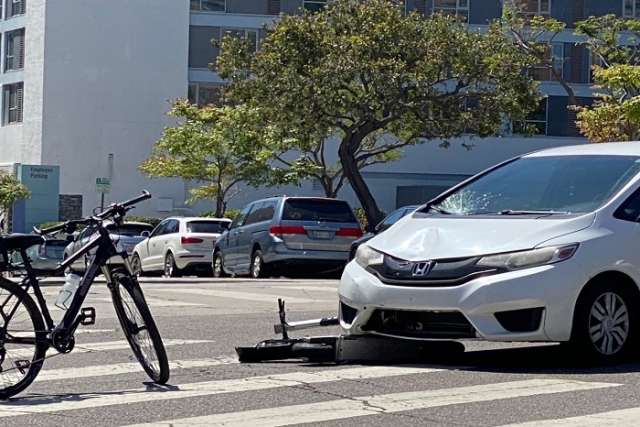 For a recent six-year period, the injury rate for riders of electric scooters in one section of Los Angeles was higher than the national rates for riders of motorcycles, bicycles and cars, and pedestrians, new UCLA research has found.

The study, published in the peer-reviewed journal PLOS One, uses data from greater Los Angeles to highlight a risk that is likely to grow globally as e-scooters proliferate. According to a 2019 McKinsey report, around the world, shareable e-scooters, which can be rented on demand using a smartphone app, could in the coming years account for 1 in 10 trips shorter than 5 miles.

“There are millions of riders now using these scooters, so it’s more important than ever to understand their impact on public health,” said Dr. Joann Elmore, senior author of the study and a professor of medicine in the division of general internal medicine and health services research at the David Geffen School of Medicine at UCLA. “The finding that rates of injuries from e-scooters are similar to rates for motorcycle injuries is startling.

“The ease of public access to on-demand shareable scooters and safety regulations that are still in their infancy suggest that e-scooter operators, cities and health care providers will continue to see a significant number of injuries each year.”

The new study encompassed many more patients — 1,354 injured people who were treated at 180 UCLA outpatient clinics as well as UCLA Health emergency departments and urgent care centers — and spanned a longer period — from Jan. 1, 2014 through May 14, 2020 — enabling them to compare data from before and after the rollout of shareable e-scooters.

Those injured in e-scooter accidents were not only the vehicles’ riders, but also pedestrians who were hit by moving e-scooters or who tripped over parked e-scooters. The researchers found that patients often were treated for injuries to the head and extremities. Five hundred thirty-three patients sustained injuries to more than one part of the body, 72 were admitted to the hospital, 21 were sent to the critical care unit and two died from their injuries.

“Overall, 33% of victims required substantial subsequent therapeutic clinical resources from our health system beyond a single clinical visit,” the researchers write. “Therefore, the impact of novel e-scooter technology may have been underestimated by early studies of [emergency department] visits alone.”

The researchers note some important limitations to their findings. For instance, they captured only data from UCLA Health facilities and did not include people who were treated at other hospitals and clinics, indicating that injury numbers may be higher. And although the study is based on one specific geographic area, the authors write that their estimate of the number of injuries per million e-scooter trips is “of the same order” as findings from other limited regional studies.

“It is important to note that e-scooter injuries may be less severe and less fatal than motorcycle injuries, but we still think our e-scooter injury rate is an underestimate,” said the study’s first author, Dr. Kimon Ioannides, who led the study as a postdoctoral fellow at the UCLA National Clinician Scholars Program.

Ioannides is now an assistant clinical professor at UCSF Fresno, and Liu and Trivedi are affiliated with the Veterans Affairs Greater Los Angeles Healthcare System.