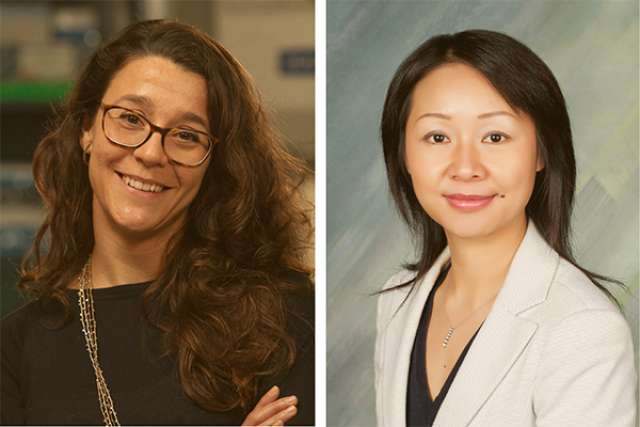 Two researchers at the Eli and Edythe Broad Center of Regenerative Medicine and Stem Cell Research at UCLA have received over $10 million in grants from the California Institute for Regenerative Medicine, the state’s stem cell agency, to develop cell therapies for melanoma and multiple myeloma. The recipients are Cristina Puig-Saus, an assistant adjunct professor of hematology and oncology at the David Geffen School of Medicine at UCLA and Lili Yang, an associate professor of microbiology, immunology and molecular genetics.

Both Puig-Saus and Yang’s grants will support their efforts to advance therapeutic candidates towards the U.S. Food and Drug Administration’s investigational new drug application process, which is required by the agency before a phase 1 clinical trial can begin in humans.

Puig-Saus’s $5.9 million award will fund translational studies of a chimeric antigen receptor, or CAR, T cell therapy she is developing for melanoma. CAR T cell therapies involve collecting patients’ T cells and engineering them in the lab to express synthetic receptors that enable the T cells to identify and attack tumor cells based on specific proteins on their surfaces.

The new CAR T cell therapy is being developed to treat people with melanoma that either did not respond to or relapsed after a treatment with a form of immunotherapy known as immune checkpoint blockade, or ICB, therapy.

These rare and deadly melanomas are significantly more common among Hispanic, Black and Asian/Pacific Islander populations. Patients with acral, uveal and mucosal melanomas tend to have worse outcomes than patients with cutaneous melanoma, also known as skin cancer, not only due to these cancers’ limited response to available therapies but also because they are often diagnosed at later stages.

Puig-Saus’s therapeutic candidate is intended to improve outcomes for patients with rare melanomas as well as patients with more common forms of melanoma who are not benefitting from current therapies. To do this, she is developing a CAR T cell therapy that targets tumor cells with high levels of a protein called tyrosinase related protein 1, or TYRP-1, on their surfaces.

While CAR T cell therapies have proven to be a powerful form of immunotherapy for various types of cancer, relapse after CAR T cell therapy is not uncommon. Puig-Saus’s cell therapy strategy is designed to reduce the risk of relapse by engineering a mixture of CAR T cells including T naïve memory stem cells, which have the capacity to self-renew and produce a number of T cell subtypes. This should allow for the persistence of melanoma-fighting cells in the body over an extended period.

Yang’s $5.9 million award will support translational studies of an off-the-shelf CAR-iNKT cell therapy she is developing to treat multiple myeloma.

Multiple myeloma is a cancer that forms in a type of white blood cell called a plasma cell. It is the second most common form of blood cancer, affects millions of people worldwide and has a 5-year survival rate of 54%.

BCMA is found at high levels on the surface of multiple myeloma cells and CAR T cell therapies targeting BCMA have shown great promise in clinical trials involving multiple myeloma patients for whom all other treatment options have failed. In March 2021, the FDA approved one such product, making it the first cell-based gene therapy to treat adult patients with multiple myeloma.

CAR T cell therapies have greatly improved the prognoses for patients with several cancers. However, they are not without limitations. Currently available CAR T cell therapies must be created using cells from each individual patient. This puts them out of reach for many people, either due to the high cost, the limited availability of specialists and centers equipped to administer these therapies or the fact that manufacturing these therapies takes weeks, leaving patients at risk of disease progression.

Yang’s treatment strategy aims to overcome these limitations of traditional CAR T cell therapies by using iNKT cells, which are unique among immune cells not only for their power and efficacy but also because they do not carry the risk of graft versus host disease, a condition in which transplanted cells attack their recipient’s body.

“Using iNKT cells as the basis for a CAR T therapy eliminates the need for each patient’s treatment to be created using their own cells,” said Yang, who is also a member of the Jonsson Cancer Center. “Therapies made from iNKT cells can be mass-manufactured and readily available to treat a broad base of patients at a low cost.”

iNKT cells have not been widely used as cell therapies previously because they are extremely rare; one drop of human blood contains around 10 million total blood cells but only around 10 iNKT cells.

To overcome this limitation, Yang has developed a new source from which iNKT cells can be abundantly derived: cord blood. This stem cell-rich blood is what remains in the placenta and attached umbilical cord after birth. After delivery, some parents opt to donate cord blood to public banks so that they can be used as stem cell transplants or in medical research.

Yang’s novel method isolates blood-forming stem cells from cord blood and then directs these cells to produce large numbers of iNKT cells. Using this method, a single donation of cord blood be used to produce between 1,000 and 10,000 doses of a therapeutic level of iNKT cells.

If Yang’s CAR-iNKT cell therapy proves successful in all the necessary pre-clinical studies and eventually through clinical trials for patients with multiple myeloma, she envisions that this platform could be expanded to treat a broad range of cancers and a large population of patients.

Both of the therapeutic strategies described above are still the subjects of pre-clinical studies and have not been tested in humans or approved by the FDA as safe and effective for use in humans.