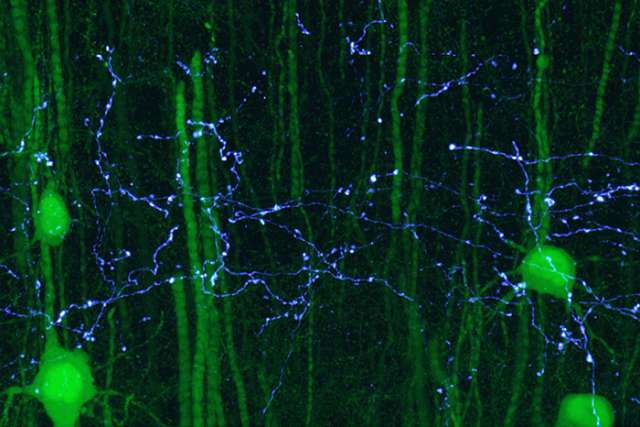 Branch-like axons (in blue) connect with neurons (in green) in the last stage of the cortico-basal ganglia-thalamo-cortical loop. (Photo Credit: Dong Lab/UCLA)

A UCLA study using mice reveals new insights into the wiring of a major circuit in the brain that is attacked by Parkinson’s and Huntington’s diseases. The findings could hone scientists’ understanding of how diseases arise in the human brain and pinpoint new targets for treatment.

Published today in Nature, the research is part of a package of 17 articles by the BRAIN Initiative Cell Census Network. The national consortium of neuroscientists aims to unlock the mysteries of the primary motor cortex, a part of the mammalian brain that controls movement.

With funding from the National Institute of Mental Health and the National Institutes of Health’s BRAIN Initiative, the UCLA scientists have been conducting a comprehensive analysis of how the mouse brain is wired. Their research has thus far meticulously analyzed 600 pathways and catalogued nerve-cell connectivity to create a wiring diagram of critical brain circuits.

“Like any explorer traveling deep into uncharted territory, we make maps to guide future visitors,” said Dr. Hong-Wei Dong, the study’s lead author and a professor of neurobiology at the David Geffen School of Medicine at UCLA. “My lab mapped out the intricate circuitry of the mouse brain to enable other scientists to conduct more accurate experiments in mouse models of diseases like Parkinson’s or Huntington’s disease.”

UCLA scientists labeled a small number of individual neurons with a green dye, enabling the team to track their connections with other neurons through arm-like projections called axons and dendrites. Those connections, called circuits, process and communicate distinct types of sensory information in the brain.

In particular, the researchers scrutinized the cortico-basal ganglia-thalamic loop, a crucial neural circuit that links regions in the brain that regulate movement, emotions and complex cognitive processes like learning and memory. The loop is affected by neurodegenerative disorders like Parkinson’s disease and Huntington’s disease, and a range of other neurological and psychiatric disorders.

“We identified smaller circuits within the cortico-basal ganglia-thalamic loop that process information for specific functions,” said Nicholas Foster, the study’s first author and a project scientist in Dong’s lab. “Some of these subcircuits enable the brain to control movement of the arms, legs and mouth. Other circuits process emotional input or complex cognitive processes, such as learning the consequences of actions.”

Foster said the research gives scientists a baseline for what normal brain wiring looks like and pinpoints smaller circuits that could go awry when neurological diseases progress.

“These subcircuits could reveal new treatment targets and serve as physiological benchmarks to measure the effectiveness of new drug treatments in preclinical experiments,” he said.

When researchers detect shortened axons and dendrites in the neurons of a particular circuit in a mouse with a certain disease, for example, they can observe where the disease is having an effect. And if scientists administer treatment to the mice and see axons and dendrites developing normally in that area, they can surmise that the treatment is effective.

“Our results illuminate clearer paths for future studies to follow by illustrating how different brain structures organize into networks and communicate with one another,” said Dong, who also leads the UCLA Brain Research & Artificial Intelligence Nexus. “These findings will enable scientists to better understand how dysfunction in one small brain region can undermine the function of its larger neural circuit.”

Dong and Foster’s future research will explore the subthalamic nucleus, an important therapeutic target for Parkinson’s disease, and how it connects to the cortico-basal ganglia-thalamic loop.

Dong is also the lead author of the BRAIN Initiative Cell Census Network’s joint anatomy paper and a co-corresponding author of its flagship paper. Before joining UCLA, the authors completed part of the six-year study while they were at the University of Southern California Keck School of Medicine.