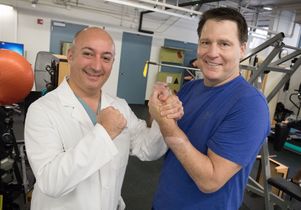 In October 2016, Jonathan Koch, a 51-year-old entertainment executive from Los Angeles, underwent a 17-hour procedure to replace the hand he lost to a mysterious, life-threatening illness. Six months after surgery by the UCLA hand transplant team and countless hours of physical therapy, Koch continues to make remarkable strides in his recovery.

Already, he has used his new hand to hold a jump rope, dribble a basketball, unscrew a bottle top and swing a tennis racquet.

His remarkable story about the illness that nearly took his life and the rare transplant procedure that helped him recover is chronicled by writer Amy Wallace in the April issue of Los Angeles Magazine.

Koch’s story opens with the description, “In just 30 hours, a super fit Hollywood executive went from the top of his game to the precipice of death. What happened next would teach him everything about grace, resolve and the power of love.”

Koch’s road to transplantation began back in 2015 after a sudden illness led to the destruction of tissue in his feet and hands. Following treatment at two out-of-state hospitals and knowing that his left hand would have to be amputated, he sought a transplant.

After Koch was accepted for the experimental transplant program at UCLA, Dr. Kodi Azari, surgical director of the UCLA Hand Transplant program and a professor of orthopaedic surgery and plastic surgery, used a novel approach to prepare Koch’s hand for the possibility of a future transplantation. He amputated the hand closer to the wrist than the elbow, keeping all of the nerves and tendons long and extended, and then attached them the patient's bone.

To help prepare for and perform the grueling surgery, Azari assembled a team that included transplant medicine physicians as well as top surgeons recruited from hospitals around greater Los Angeles, most of whom trained at UCLA. This was crucial to Azari's plan because “hand transplants can throw you curveballs. They’re never as you expect,” he said in the article.

As with any organ transplant, Koch must now take immunosuppressant medications to help prevent his body from rejecting the new hand. One of the world’s experts in transplant medicine, Dr. Sue McDiarmid, medical director of the UCLA Hand Transplantation Program, is overseeing his care.

“It’s a delicate balance of finding the right combination of drugs that minimize the side effects, but are still effective in preventing rejection,” said McDiarmid, who is also a professor of pediatrics and surgery, and director of the Dumont–UCLA Pediatric Liver Transplant Program. “Jonathan has been a great patient during this process, and we are very happy with his progress.”

Koch’s story, as described by Wallace, is one of inspiring drive and determination. Before transplant surgery, Koch hired a personal trainer so he could be in top physical shape to give himself the best possible chance of a successful recovery. After the surgery, he will spend about a year with occupational therapists at UCLA working with his hand. Of course, his journey could not have been possible without the priceless gift of the donor’s hand and the family members who agreed to donate it for transplanation.

Koch's compelling story reads like a movie script, except it is real life, like the many unscripted reality shows the Hollywood executive has brought to television.