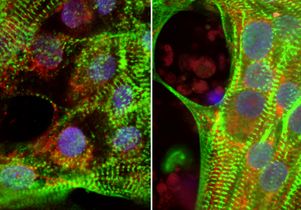 Researchers at the Eli and Edythe Broad Center of Regenerative Medicine and Stem Cell Research at UCLA have discovered how high glucose levels — whether caused by diabetes or other factors — keep heart cells from maturing normally. Their findings help explain why babies born to women with diabetes are more likely to develop congenital heart disease.

The study, which was led by Atsushi “Austin” Nakano, a UCLA associate professor of molecular, cell, and developmental biology and member of the Broad Stem Cell Research Center, was published today in the journal eLife.

When developing heart cells are exposed to high levels of glucose, the researchers found, the cells generate more building blocks of DNA than usual, which leads the cells to continue reproducing rather than mature.

Although genetics plays a large role in the development of congenital heart disease, the leading non-genetic risk factor for the disease is a mother having diabetes during pregnancy. Babies born to women with high levels of glucose in their blood during pregnancy are two to five times more likely to develop the disorder than other babies. However, researchers have never been able to define the precise effect of glucose on the developing fetus.

The researchers discovered that, when exposed to extra glucose, the cardiomyocytes over-activated the pentose phosphate pathway — a cellular process that, among other things, generates nucleotides, the building blocks of DNA. In cells with high glucose levels, the pentose phosphate pathway made more nucleotides than usual. The scientists showed that the excess of building blocks kept the cells from maturing.

“More nutrition is generally thought to be better for cells, but here we see the exact opposite,” Nakano said. “By depleting glucose at the right point in development, we can limit the proliferation of the cells, which coaxes them to mature and makes the heart muscle stronger.”

Nakano’s group observed the same thing at work in pregnant mice with diabetes: The heart cells of fetuses divided quickly but matured slowly.

Nakano said the finding could lead to better methods of making cardiomyocytes from stem cells. Today, most protocols for generating cardiomyocytes in the lab lead to immature cells, but targeting the pentose phosphate pathway could help generate more mature cells for regenerating heart cells or for research purposes.

Congenital heart disease affects nearly 1 in 100 children born in the U.S., making it the most common birth defect. The severity of the symptoms it causes varies, ranging from a slightly weakened heart muscle and no symptoms to severe heart deformations that require surgery.

The pentose phosphate pathway as a target for cardiac maturation is covered by a provisional patent application filed by the UCLA Technology Development Group on behalf of the University of California Regents, with Austin Nakano and Haruko Nakano, a UCLA assistant researcher, as inventors.

The research was supported by grants from the Oppenheimer Foundation, the National Institutes of Health, the National Center for Research Resources and the Chinese Scholarship Council of Chemistry and Chemical Engineering, as well as funding from the Center for Duchenne Muscular Dystrophy at UCLA and the Broad Stem Cell Research Center.