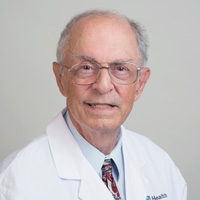 Dr. Seymour Levin is an attending endocrinologist at the West Los Angeles VA Medical Center and an emeritus professor of medicine at the David Geffen School of Medicine at UCLA. He is board certified in internal medicine and endocrinology.

During his long and fulfilling career, Dr. Levin has combined clinical work with research and teaching. He directed the West LA VA Diabetes Clinical and Research Programs from 1973 to 2000 and was on the West LA VA Medical Center Human Experimentation Committee for 14 years. He authored or co-authored more than 130 peer-reviewed scientific papers on complications of diabetes and the mechanisms of insulin secretion and has participated in more than 40 clinical trials. He has also taught everyone from young students to medical professionals and has been an active member of the American Diabetes Association, The Endocrine Society, and other national and local organizations.

Dr. Levin has received many awards in his career, including the Francis Senear Clinical Award, given to him by his University of Illinois medical school classmates in 1961 to recognize his “outstanding ethical, moral and personal qualities essential to a fine physician”; a Teacher of the Year Award from the VA Wadsworth Housestaff in 1974; an American Diabetes Association (ADA) California Affiliate Tribute Award for “contributions to teaching, research and patient care" in 1996 and a LEARN ADA Lifetime Achievement Award in 2013; and a Lifetime Achievement Award from the Wadsworth VA Physicians and Surgeons Alumni Association in 2005.

Dr. Levin was raised in Chicago. He received his bachelor’s degree in zoology from the University of Illinois. He then earned his medical degree from the University of Illinois School of Medicine, after which he served as an intern at Cook County Hospital in Chicago. He moved out west in 1962 and completed his medical internal medicine residency at the West LA VA / UCLA Medical Centers. He then served in the US Army Medical Corps during the Vietnam War, and after his return, completed a research fellowship at the University of California Medical Center in San Francisco, with Drs. Peter Forsham and Gerold Grodsky as mentors. Dr. Levin remained in San Francisco for an additional five years, as a supervising physician at the UC San Francisco Metabolic Clinic and then an assistant research physician and attending endocrinologist, before returning to UCLA for the remainder of his career.

Dr. Levin has published more than 130 peer-reviewed articles, including the following:

Seymour R. Levin, MD click here to update your profile
Back to search