It took Dr. Colin McCannel years to train for and then 12 hours 18 minutes and 13 seconds to swim the 20 miles between Catalina Island and Palos Verdes, where he came ashore at Smuggler's Cove. Photo: Terence Young Images

By Robin Keats. Stars glitter in the midnight sky as a lone swimmer cuts through the dark waters of the Catalina Channel, one arm rhythmically rising through the swell as another descends. Sharks also swim in these waters, but Colin McCannel, MD (RES ’95, FEL ’98), considers the possibility of being hit by another car while driving on the 405 to be a much greater risk.

As Dr. McCannel, professor of clinical ophthalmology at UCLA Stein Eye Institute, closes the distance between Catalina Island and the Palos Verdes Peninsula — some 20 miles — a manned kayak follows nearby, just in case of an emergency. 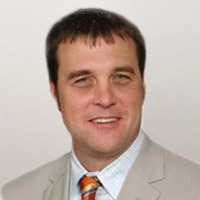 On board a dive boat not far away, a friend videotapes Dr. McCannel’s slow crawl through the chilly water. Before beginning his swim, Dr. McCannel is heard on the video to say, with a laugh: “It seemed like a good idea. Now it seems like a stupid idea.” At around 10:45 pm, he enters the water at the edge of Catalina’s Doctor’s Cove, turns to face the camera and raises his arms, and a companion proclaims: “What an adventure we’re about to have!”

The swim took place in September 2019. “The fun of swimming was intermittently replaced with worry,” Dr. McCannel says. The current was strong and the water choppy. “Will I make it if it stays like this or gets worse? Go away bad wolf! Hush! I kept swimming.” He swam to the rhythm of Queen’s anthem “We Will Rock You” playing on a continuous loop in his head.

Now that he’s completed the Catalina crossing — “When it was over, I thought, ‘Wow, it’s done already? I still feel great.’ When I got home, I slept for 14 hours!” — Dr. McCannel’s sights are set on one day swimming the English Channel. “My wife’s been tolerant, but she is not anxious for me to do it any time soon,” he says. “Maybe a swim to Anacapa Island — a mere 12 miles — will be next.”

Dr. McCannel spent three years building a “base” with intense swim training before training for six months specifically for the channel crossing. By the time he came ashore around 11 am at Smuggler’s Cove, it had taken 12 hours 18 minutes and 13 seconds to complete, according to the unofficial time posted by the Catalina Channel Swimming Federation. That might seem to many people like a perilous undertaking. But Dr. McCannel says the challenge of pitting himself against the sea lightens his mind and elevates his spirits. “I’ve always enjoyed the vastness of the ocean, of being such a tiny part of its massive expanse,” he says. “You see nothing but water as you swim. It’s so tranquil.”

“When it was over, I thought, ‘Wow, it’s done already? I still feel great.' When I got home, I slept for 14 hours!,” says Dr. McCannel, who was accompanied throughout his swim by a kayak and boat. Photos: Terence Young Images

There are parallels between Dr. McCannel’s passion for long-distance swimming and his role as an ophthalmic surgeon. The same focus and determination are as necessary to cross a large body of water as they are to repair the delicate structures of the eye. And there is uncertainty in both endeavors.

“As a surgeon, you must maintain your composure in a sometimes very stressful, imperfect situation. I perform micro-surgery. Being nervous is not an option; you can’t do surgery when you’re shaking,” he says. The same is true in the water, where it sometimes is necessary to react quickly to sudden changes.

DR. MCCANNEL COMES FROM A FAMILY OF PHYSICIANS. He is the son of a urologist, the stepson of a family practitioner, the nephew of an ophthalmologist and the husband of another ophthalmologist, Tara McCannel, MD, PhD, director of the Ophthalmic Oncology Center at UCLA. As an undergraduate, he thought about becoming a chemical engineer, but he wanted more social interaction in his professional life.

He attended medical school at the Mayo Clinic in Rochester, Minnesota, and came to UCLA for his residency before returning to Mayo. He joined the UCLA faculty in 2008.

Dr. McCannel had been a runner before a torn meniscus prompted him to switch to swimming. “It’s really a nice outlet from the stress of my job,” he says. “When you start approaching mid-life, as I was when I began to train for marathon swims, you realize your body is starting to deteriorate. I thought about what I could do to slow that down as much as possible.” While swimming has proven to be a great stress reliever, Dr. McCannel says he is not sure what it is that motivates him in his long-distance pursuits.

“I can’t explain why I do this, but throughout my life, even as a child, whenever I’ve been on a coast and there was an island, I thought it would be cool to swim to it,” he says. “I never acted upon it, and when I first heard about people taking on such challenges, there was no thought on my part that I’d ever do it. But then I met some people who had done it, and I thought if they could, I should be able to, too.”

There’s a triple crown of marathon swimming: Catalina Channel, the English Channel and a swim around Manhattan. “I’m not planning on completing the other two anytime soon,” he says. His voice is somewhat wistful, but the look in Dr. McCannel’s eyes suggests that just might be what the future holds.

Robin Keats is a freelance writer in Los Angeles.

Previous
Vape Not
Next
A Garden of Memories