From Africa to Westwood

As an officer with the Epidemic Intelligence Service of the Centers for Disease Control and Prevention, Dr. Annabelle de St. Maurice investigated outbreaks of infectious diseases in Africa, South America, the Caribbean and the United States. Photo: Kay Hinton

Annabelle de St. Maurice, MD, MPH, had just completed a fellowship in pediatric infectious diseases and earned her master’s degree in public health at Vanderbilt University School of Medicine In Nashville, Tennessee, when she embarked on a new journey as an officer with the Epidemic Intelligence Service of the Centers for Disease Control and Prevention (CDC). That was in July 2015. A month later, Dr. de St. Maurice landed at Conakry International Airport in the Republic of Guinea during the Ebola epidemic that had swept through West Africa.

Having grown up in a bilingual French-English-speaking home, her language skills were particularly valuable in a country where French is the official language, and “there was a need for French-speaking physicians to help combat Ebola,” she says. She checked in to the best hotel in the capital city, but “that only lasted a few days,” Dr. de St. Maurice says.

“I was sent by truck a few hours north to a remote town, where I was the only person from the CDC.” Together with local teams, she worked to build a structure for infection-prevention audits at nearby clinics. “It was unlike anything I’d experienced, as I saw, up close, the challenges of getting PPE (personal protective equipment) distributed to slow this highly infectious virus. I was able to use my French-language skills to help people like I had never done before.”

The time she spent in Guinea was among Dr. de St. Maurice’s many formative experiences along her road to become co-chief infection prevention officer for UCLA Health and a key architect of UCLA’s response to the COVID-19 pandemic. During her time in West Africa, the issue of PPE for health care workers fighting Ebola was similar to what she would experience five years later with SARS-CoV-2, the virus that causes COVID-19.

More assignments with the CDC followed. After she completed her work in Guinea, Dr. de St. Maurice was sent to Uganda to investigate an outbreak of Rift Valley Fever, another viral hemorrhagic fever that is common in cows and goats. “We visited abattoirs where the animals were being slaughtered — a messy affair with blood and potential bodily fluid transmission — and tested [those doing the slaughtering] for antibodies,” she recalls.

There also were projects abroad with the Viral Special Pathogens Branch of the National Center for Emerging and Zoonotic Infectious Diseases in Liberia, Brazil and Haiti. Closer to home, she investigated an outbreak of Seoul virus — a variant of the hantavirus family that is transmitted to humans from wild rodents but in this case came from rats bred as pets or for food for other animals — in Wisconsin and Illinois. The virus is so rare, only the CDC has the capability to conduct a conclusive test. “It usually is only seen in Southeast Asia, but after investigating, we found a large number of rat breeders were testing positive,” she says. She and her fellow investigators created recommendations for breeders, pet stores and vets across the U.S who came into regular contact with rats. “The challenge with any novel pathogen is you have to come up with mitigation measures as the outbreak is unfolding,” Dr. de St. Maurice says. “That’s not something you normally would have to do in clinical care.”

All of that experience came to the fore when the COVID-19 pandemic officially arrived in the U.S. “We had been talking about SARS-CoV-2 since January, when the virus was first identified in China. When we realized how quickly it was spreading, we started thinking about how we would approach patients here with COVID-19,” Dr. de St. Maurice says. Working with Daniel Uslan, MD, clinical chief for infectious diseases and co-chief infection prevention officer, Dr. de St. Maurice has been working overtime since then to manage the potential spread of the virus within UCLA’s hospitals and clinics.

“We’ve worked to keep patients safe while in the hospital, as well as ensuring that central lines and other invasive medical devices don’t transmit infection,” she says. “We’ve never run out of PPE [during outbreak peaks of SARS-CoV-2]. We did a lot of early training on how to put on and take off PPE, to help minimize transmission, and it worked.”

Public health, Dr. de St. Maurice says, is always a team sport. “I’ve been at UCLA for two-and-a-half years, with the same small group,” she says. “Then along comes COVID, and I’m on daily Zoom calls with virtually every physician across the hospital, being part of a large team.”

As she learned in West Africa, “the knowledge gained [during an outbreak] and the recommendations made are always evolving. Clear and constant communication, in a language everyone can understand, is key,” she says. 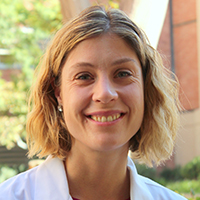 Since the beginning of her career in medicine, Dr. de St. Maurice has been focused on population health. “I chose medical school at the University of Rochester because they had an emphasis on a bio-psycho-social model, which focuses on how our health is affected by the communities around us,” she says. “Vandy” — Vanderbilt University — “is where I fell in love with epidemiology,” as she studied rates of invasive pneumococcal disease in Tennessee.

Another of her missions while with the CDC was to conduct a data analysis with the health department of the Navajo Nation to identify risk factors for becoming infected with hantavirus. “Our nationwide data showed those working outdoors made up a significant number of cases, home exposure was more common among those residing in Western states and Native American women had the highest mortality,” she says. “That information was used to help alert people to the precautions they needed to take in their homes or workplace to prevent occupational infections.

“That experience, as in Guinea and at UCLA with SARS-CoV-2, was so inspiring,” Dr. de St. Maurice says. “It is wonderful when health care professionals from across disciplines align for the same mission to help people.”

David Geffner is a freelance writer in Los Angeles and executive editor of ICG Magazine.

Previous
The Day After
Next
Awards & Honors