Dr. Sherman M. Mellinkoff was a visionary leader, a humble man of quiet greatness who put UCLA’s medical school on its path to excellence. On the occasion of his 100th birthday, we honor his memory.

Leadership is the title for this section of U Magazine, and within this space I would like to tell you about a leader who was among the most influential in my life. Dr. Sherman M. Mellinkoff was dean of the school of medicine when I first came to UCLA as a trainee in the late 1970s. He had been dean — the second in the history of what was then still a very young medical school — since 1962 and had achieved such stature that he was known among his peers in academic medicine as the “Dean of Deans.”

While he was “Dean of Deans” on the national stage, to those of us who knew and worked with him every day, he was simply Sherm, a one-of-a-kind leader of immense integrity, unassuming yet worldly, a true statesman.

After completing my training, I joined the UCLA faculty and then took on leadership roles. I had many interactions with Sherm, and he and I became good friends. He was fond of jotting down his thoughts and sending notes to me and other faculty. Sherm retired as dean in 1986. In the eight years before his death, in 2016, at the age of 96, I’d walk past his house on my way home after work and sometimes would stop in, and we would have tea and cookies — always tea and cookies — and talk. Despite his frail physical state, his mind was sharp and inquisitive, and our talks were filled with references to mythology or the Peloponnesian War — subjects I hadn’t contemplated since college — the classics of literature and wide-ranging discussions of so many other topics. I still cherish those visits with Sherm.

When he was dean, I would occasionally go to his office to talk about a problem or to ask for resources, and after I would leave feeling calm and relaxed. It really was remarkable. You could be fuming over something, and in the end, you came away mesmerized by his graciousness and his ability to defuse the emotional part of any issue. Whether the answer was “We can do that” or “We can’t do that” or “We can do part of that,” he would help to solve the problem, always with a strategic goal in mind. Ninety-nine percent of what he did was getting you back to a place where you could hear and accept the answer, whatever it was. That is a great skill to have as a leader, to be able to separate the emotion and other factors from the specifics of the decision.

For Sherm, being dean was never about him. He believed that the purpose of a dean was to serve the faculty and trainees, and he devoted his life to those goals. He sought to foster greatness in others. He was friendly and at ease and always appeared to have an infinite amount of time to share with you. On what would be the occasion of Sherm’s 100th birthday in March, another UCLA colleague, Dr. Claire Panosian Dunavan, writes more about these qualities and shares memories of the man she knew as a close friend.

Sherm served the UCLA School of Medicine as dean for nearly a quarter-century — an incredible feat, considering that the median tenure for first-time deans of medical schools in the U.S. is around six years. Truly, he was the “Dean of Deans.” Under Sherm’s extraordinary leadership, UCLA’s medical school grew from a fledgling institution to one with a national reputation for outstanding medical education and groundbreaking research.

In 2015, UCLA Chancellor Gene D. Block asked me to take on the combined roles of dean, CEO of UCLA Health and vice chancellor for UCLA Health Sciences. As I thought about whether or not it was possible — or even desirable — to assume all those roles, I called Sherm for advice. “What do you think?” I asked him. He didn’t answer right away. Then he said just one word: “Tea.” We picked a day, and I went to see him. He wanted to understand what the jobs were like today; they are far different from when he was at the helm. Then, it was more of a mom-and-pop operation, a start-up engaged in building and growth, as opposed to today’s huge business enterprise that involves a massive medical school and an expansive health care system with hospitals and clinics throughout the region.

“I have a couple of suggestions for you,” he said, after listening thoughtfully. “Number one, do it.” Then he added, “Be yourself, do the right things and, most of all, make sure that every single day you’re having fun doing it.” I asked, “How would you advise me to optimize the fun part of this job?” “Be of good cheer,” he said. That’s what he always would say when parting ways, “Be of good cheer.” Such was his constant refrain: Be upbeat. Be positive. Be a part of the solution. Enjoy what you are doing.

What are the lessons I learned from Sherm that serve me today as a leader? Here are five. 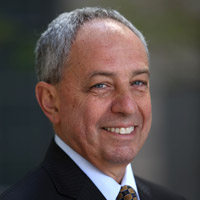 The week after Sherm’s death, all the department chairs, research unit directors and health system leadership met in the room in the Center for Health Sciences where the portraits of the past deans of the school of medicine were hung. We stood in silence and looked at Sherm’s kind face and remembered who he was and what we all owe to him. I am grateful to continue to benefit from Sherm’s vision and wisdom.