Quincy Jones, his eyes closed, exudes a sense of calm and serenity. Sheryl Crow brings her hands together as if in prayer. Metallica drummer Lars Ulrich clasps his hands behind his head, his open mouth forming a perfect O.

These, and 38 other images of artists captured as they listened to their favorite music, are the work of UCLA physician and fine-art photographer Richard M. Ehrlich, MD. They were displayed at an exhibit, Face the Music, which ran for three months at the end of last year at the Grammy Museum in Los Angeles, and published in a book of the same name.

“Rick’s ability to convey emotion and music and how music is impactful on so many different levels encapsulates what we do here,” says Nicholas Vega, director of curatorial affairs for the Grammy Museum, during the show’s opening reception in September. “He’s got a great eye.” 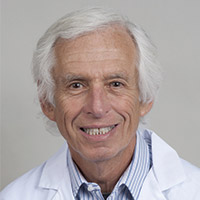 This was not the first exhibit, nor photography book, for Dr. Ehrlich, whose day job is as a pediatric urologist. His photographs are in the permanent collections of 17 museums worldwide, including the J. Paul Getty Museum, Smithsonian National Museum of American History, Los Angeles County Museum of Art and the United States Holocaust Memorial Museum. Approximately 100 of his donated works adorn the UCLA campus. One photograph displayed in UCLA’s Luskin Conference Center is of Royce Hall taken with a camera that was made in 1880. Another of Dr. Ehrlich’s pictures, of Powell Library, is a photomontage of 3,000 images from slides belonging to UCLA’s Department of Art History.

“Photography has sort of taken over my life,” Dr. Ehrlich says. “I think about taking pictures all the time.”

Dr. Ehrlich has published more than a dozen photography books on subjects as diverse as the sand dunes of Namibia, close-up studies of sculptural surfaces, impressionistic sunsets over the Pacific Ocean and artistic interpretations of radiological images. He spent two years with his cameras to chronicle the construction of Ronald Reagan UCLA Medical Center. The prestigious German fine-art publisher Steidl published Face the Music, and later this year it will release Arolson Archives, images of artifacts and vast caches of documents that make up the Holocaust archives at the International Tracing Service in Bad Arolson, Germany. Another book, Faces of Promise, features portraits of children with autism.

“I’m always looking for new things that haven’t been done before,” Dr. Ehrlich says. “Today, with the cell phone being so ubiquitous, everybody is a photographer. So to do something different is hard.”

Dr. Ehrlich pursued photography as a youth and had a dark room in his childhood home in Westchester, New York. But he gave up the pursuit to focus on baseball, at one time hoping to become a professional ball player. He returned to photography about 15 years ago, he says, “in a serious way, not just as a hobby. I said, ‘If I’m going to get back there, I’m not going to do it superficially. I’m going to do it really seriously, so I studied and I read and I went out and took a million photographs.”

Capturing images of the 41 musicians and composers featured in Face the Music proved both gratifying and taxing. As a lover of music — jazz in particular — Dr. Ehrlich enjoyed meeting some of his favorite artists. Convincing managers to give access to their musician clients, however, often proved challenging. The endeavor took five years, and there were times when he considered quitting.

Highlights of the project included snagging Ringo Starr as a subject, photographing Renee Fleming in the former Manhattan studio of fashion photographer Irving Penn and spending a day with Dave Brubeck, who passed away several months later.

Dr. Ehrlich also found the artists’ choices of music revealing. Each was asked to choose three songs to listen to as they were being photographed. The Who frontman Roger Daltrey chose Edith Piaf, country artist Rosanne Cash selected The Beatles, trumpeter and music producer Herb Alpert listened to Luciano Pavarotti and Esperanza Spalding was transported by Nina Simone.

“It was an incredibly fulfilling once-in-a-lifetime opportunity, personally and professionally, to capture some of the world’s most iconic musicians while they listened to their favorite songs,” Dr. Ehrlich says.

After completing his medical training in New York — MD and surgical residency at Cornell University Medical College and urology residency at Columbia Presbyterian Medical Center — Dr. Ehrlich served for two years as a major in the U.S. Air Force. In 1971, he joined the faculty of UCLA, where he performed the medical center’s first pediatric laparoscopic procedure.

His most recent photography book, Out of the Fire — Abstract Truth, features images of patterns formed on the sides of cars burned during the 2018 Woolsey Fire, which destroyed more than 1,600 structures and scorched 96,949 acres in the Santa Monica Mountains. A resident of Malibu, Dr. Ehrlich had to evacuate during the fires. When he finally was able to return to his home, which was spared, he was struck by the sight of the burnt cars.

Dr. Ehrlich says that medicine and photography both require skill, discipline and attention to detail. He recalls a specific instance when his two passions coalesced. “One day I went to the room of a patient I’d operated on, and in the room was one of my photographs. I thought that was really cool — to see the patient, in bed post-op, and the photograph that I shot on the wall.”

Nancy Sokoler Steiner is a freelance writer in Los Angeles.

Watch a video of Dr. Ehrlich photographing musicians and composers for Face the Music >