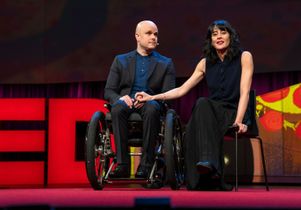 If you think listening to a paralyzed, blind man discuss his life does not sound uplifting, meet Mark Pollock. Social psychologist Amy Cuddy, whose TED talk about body language has nearly 15 million views, describes the new talk by Pollock and his partner, human rights lawyer, Simone George, as “the most powerful, moving talk I have ever seen at TED.”

Pollock lost his vision at 22 and became paralyzed after an accident at 39 that left him, in his words, “on the very edge of survival.” You certainly wouldn’t know that seeing him now in this talk, titled “A love letter to realism in a time of grief,” and the fulfilling life he is living.

In the talk, he and George discuss how during the 16 months spent in hospitals, doctors discouraged them from hoping for a cure for paralysis.

A robotic exoskeletal device allowed Pollock to stand and walk more than 1 million steps, although George explains that the robotic device was doing all the work.

Then George says in the talk, they met a “true visionary” at UCLA: Dr. Reggie Edgerton, “the most beautiful man” whose “life work had resulted in a scientific breakthrough.” Edgerton is a UCLA distinguished professor of integrative biology and physiology, neurobiology and neurosurgery.

“Using electrical stimulation of the spinal cord, a number of subjects had been able to stand and regain some movement and feeling — and most importantly, to regain some of the body’s internal functions that are designed to keep us alive and to make that life a pleasure,” George says. “Electrical stimulation of the spinal cord, we think, is the first meaningful therapy ever for paralyzed people.”

Pollock is the first person with chronic, complete paralysis to regain enough voluntary control to actively work with a robotic device and take steps. Applying electrical stimulation of his spinal cord as he walked in his robotic exoskeletal device was like watching Iron Man, George says.

“Simone, my robot and I moved into the lab at UCLA for three months,” Pollock says. “Every day, Reggie and his team put electrodes onto the skin on my lower back and pushed electricity into my spinal cord to excite my nervous system as I walked in my exo, and for the first time since I was paralyzed, I could feel my legs underneath me.”

Because of the stimulation, he was able to voluntarily move his paralyzed legs. “As I did more, the robot intelligently did less,” he says. “My heart rate got to a normal running training zone of 140 to 160 beats per minute, and my muscles, which had almost entirely disappeared, started to come back.”

Lying on his back in Edgerton’s laboratory more than three-and-a-half years after he became paralyzed, Pollock was able, with the electrical stimulator turned on, to pull his knee to his chest.

“Science is love,” George says. The two of them have discarded the advice from the earlier doctors to avoid hoping for a cure.

A theme of their TED talk, is how to resolve the tension between acceptance and hope.

Sixty million people worldwide are paralyzed. Pollock’s life inspires hope to them and many others.