The UCLA Department of Urology is committed to ongoing Male Urology research in a quest to develop new treatments and cures for all urologic conditions, along with a commitment to educate and train the next generation of leading physicians and scientists.

Dr. Gonzalez-Cadavid has made significant research contributions in several fields of cellular and molecular biology approaches to pathophysiology. He focused initially on alterations of collagen deposition with aging, and later on mitochondrial biogenesis and protein synthesis. These studies evolved into the role of mitochondrial DNA and different oncogenes in tumor progression, and after joining the UCLA Department of Urology he focused on topics of urology relevance, mainly androgen dependence of penile growth and erectile function, and the effect of risk factors for erectile dysfunction, such as aging, diabetes, and smoking, on the nitric oxide/cGMP control of the erectile response. His group reported the first demonstration of the correction of erectile dysfunction in an animal model by gene therapy, and more recently showed that long-term continuous administration of nitric oxide donors and PDE5 inhibitors corrects in animal models the underlying corporal and arterial fibrosis associated with aging, diabetes and radical prostatectomy, as well as the fibrotic plaque of Peyronie’s disease. Lately, he has extended those studies to the modulation of multipotent and stem cell differentiation by nitric oxide, cGMP, and myostatin, and its application to the therapy of erectile dysfunction and other forms of urogenital disease and other conditions associated with tissue fibrosis. He is currently funded for some of these studies by NIH, the Department of Defense, and other agencies. 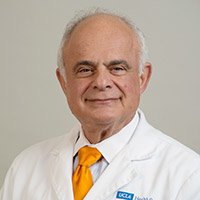 Jacob Rajfer, M.D. has made UCLA one of the top basic science research centers in the field of impotence, specializing in the molecular events surrounding the production of nitric oxide, the chemical responsible for the erectile process. Since 1980, Dr. Rajfer has headed the clinical and teaching programs in Urology at the Harbor-UCLA Medical Center . Many specialties within Urology-- including pediatrics, renal transplantation, oncology and andrology--have been expanded at Harbor and a number of important discoveries have resulted from the clinical and research activities at Harbor under Dr. Rajfer's guidance. It was these research activities that led to the discovery at UCLA of what chemicals cause an erection and explained in detail how drugs like Viagra work in helping men with impotence.

In addition to serving as Chief of Urology at Harbor-UCLA Medical Center , Dr. Rajfer is a Professor of Urology at the David Geffen School of Medicine's Department of Urology. He is Board Certified by the American Board of Urology and holds a number of important patents for medical discoveries related to the field of urology.