Cataracts — clouding of the normally transparent lens of the eye — are the leading cause of visual impairment. By age 65, more than 90 percent of people have a cataract, and half of the people between the ages of 75 and 85 have lost some vision due to a cataract. A cataract cannot be removed with eye drops; surgery is the only treatment to remove the clouded lens and replace it with a plastic intraocular lens (IOL). Approximately 3 million cataract surgeries are performed annually in the United States, making the procedure the most commonly performed outpatient surgery. 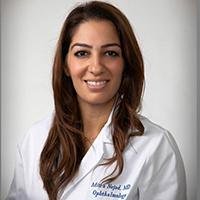 Cataract surgery is indicated when patients are experiencing symptoms such as dimmed vision or glare with oncoming headlights that are affecting their daily life, and these symptoms are attributable to a cataract, explains Mitra Nejad, MD, a surgeon in the Stein Eye Institute’s Division of Cataract and Refractive Surgery.

The most common IOL used is a standard monofocal lens, which can only focus light into one point in space; therefore, most patients will require glasses for the majority of their tasks after cataract surgery. Newer premium lenses like bifocal implants, which correct for both far and near vision, are available and make people less dependent on glasses. The choice to place a premium IOL as opposed to a standard lens, however, entails additional costs to the patient that are not covered by insurance, and is dictated by patient preference and preoperative clinical findings.

As in most areas of medicine, technology that enhances benefits to patients is evolving. In the field of cataract surgery, the latest advance is a trifocal lens designed to allow cataract patients to see well at all distances — near, mid-range and far — while minimizing the need for glasses. The lens has been available internationally since 2015, but was approved by the Food and Drug Administration for use in the United States in August. UCLA is among the first academic institutions in the country to make the new technology available to patients.

There has been a trend toward seeking cataract surgery at an earlier age. “It’s not that people are necessarily developing cataracts earlier, but their visual demands are greater,” says UCLA cataract surgeon Shawn Lin, MD. “It used to be that cataract surgery was simply aimed at allowing people to be able to see, but the bar is higher with smart phones, computers and more active lifestyles.”

The new trifocal lens, coupled with laser-assisted cataract removal, which is designed for a gentler and more precise procedure, “is a major advance for the quality of life of our patients,” Dr. Lin says.

For more information about eye care at UCLA, go to: uclahealth.org/eye