Trust your care to our dedicated sarcoma experts. For more information, connect with a cancer care specialist at 888-662-8252.

When Dr. Frederick Eilber first began operating on sarcoma patients in the early 1970s in the new surgical oncology division at UCLA, most of his procedures were limb amputations.  None of his patients were given chemotherapy or radiation, and many would die later when their cancer came back and spread to other organs. 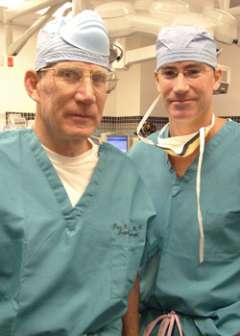 Now, three decades later, as Eilber’s son prepares to take over the UCLA Sarcoma Program that his father founded, things are much different. Most high risk sarcoma patients get treated with chemotherapy and radiation before surgery, shrinking the cancer enough to allow gifted surgeons such as the Eilbers to remove the disease and save the limbs.

Fritz Eilber, a surgical oncologist specializing in sarcoma like his father, hopes to develop new targeted therapies that will lead to more effective treatments for these cancers. In conjunction with his medical oncology colleagues, he is creating a translational research program that brings together experts from other disciplines to test new therapies that will target what has gone wrong in the cancer cells and leave the healthy cells alone, providing less toxic treatment to patients.

“Surgically, we can handle these tumors. In combination with radiation therapy and traditional chemotherapy, we achieve excellent local control. Unfortunately the disease often metastasizes and that’s what can kill these patients,” said Fritz Eilber, an assistant professor of surgery. “This is a new era, with more specific targeted therapies that hone in on what is causing the cancer. My hope is that within two years, we’ll have a series of new, more effective therapies to offer patients.”

Blazing new trials is not uncommon in the Eilber family. It may, in fact, be a trait the son inherited from the father.

The standard treatment modality of amputation in the 1970s didn’t sit well with Frederick Eilber. As a senior surgical fellow at M.D. Anderson Cancer Center in Texas, Eilber was exposed to a different treatment model, which called for children with sarcoma to be treated with radiation before surgery to shrink the cancer and perhaps stave off amputation. Despite opposition from nay sayers, the elder Eilber took that model into adults when he came to UCLA, treating sarcoma patients with chemotherapy and radiation before surgery.

“Everyone said it would fail,” said Frederick Eilber, who had to administer the chemotherapy to his patients himself because he couldn’t interest any medical oncologists in his new treatment model. “I had to call an oncologist friend in New York to make sure I was giving the right amount.”

Frederick Eilber’s vision of a new way to treat adult sarcoma patients resulted in great success. Over time, surgeons were able to save the limbs of about 95 percent of sarcoma patients using the new model. Later, Frederick Eilber focused his research on giving new drugs after surgery to improve survival and stave off recurrence of the cancer.

With the Vietnam War raging and the draft threatening – the so-called “doctor draft” channeled physicians into two-year, obligatory service – Eilber applied for the elite Associate Training Program at the National Institutes of Health. He was accepted for one of five coveted positions and it was in that program that he became interested in cancer research. Following the NIH program, Frederick Eilber returned to the University of Maryland Hospital as chief surgical resident, and later was a senior fellow at M.D. Anderson, where he was first exposed to the treatment model that would save so many limbs for Eilber’s adult patients at UCLA.

Fritz Eilber took a slightly different path to surgical oncology. Although he’d taken all the pre-med courses at the University of Pennsylvania, he was an anthropology major when he graduated. A self-described “surfer boy” who grew up on Santa Monica’s beaches, Fritz Eilber took a year off after college and worked as a ski instructor.

That year, he said, made him realize that he wanted to do something more meaningful with his life. He’d always had an interest in science, so he decided to attend medical school. Before enrolling at UCLA, he did a summer American Cancer Society fellowship at the University of Pennsylvania, working with a prominent surgical oncologist – recommended, of course, by his father.

“I was glad he went into medicine. It’s been very rewarding for me,” said Frederick Eilber, a professor of surgery who also served as chief of the surgical oncology division for nine years. “There was no pressure for him to do what I do, but when he chose to be involved in cancer and surgery, it was fine with me.”

Fritz Eilber completed his internship and residency at UCLA. In addition to the clinical work, he did a two-year research fellowship with his father and Dr. James Economou, studying sarcomas. Following that, he served as a surgical oncology fellow at Memorial Sloan-Kettering Cancer Center, which allowed him to operate on many types of cancer.

Both father and son play down the whole father-and-son aspect of their unique situation. That they’re both surgical oncologists at UCLA intent on finding new ways to combat sarcomas isn’t a big deal to them. The fact that the elder Eilber will be passing the leadership of the UCLA sarcoma program on to the younger Eilber doesn’t seem unusual at all.

“The opportunity to work with my father and to make a smooth transition into running the sarcoma program here is great, but it’s not why I’m here,” said Fritz Eilber, who was aggressively courted by Sloan-Kettering before coming to UCLA in September 2004.

Instead, he said, it was the opportunity presented by Economou, Dr. Dennis Slamon, and UCLA's Jonsson Comprehensive Cancer Center to do translational research that was the lure. UCLA’s strength in multidisciplinary research – bringing together surgeons, oncologists, imaging experts, and basic scientists - provides Eilber access to top clinical and scientific expertise. And the sarcoma program’s enormous volume of patients allows him to collect tumor samples to study in the lab in his search for new targets for new, less toxic therapies.