High Dose Rate brachytherapy is used to give an added radiation dose to lung cancers that are located in the major bronchi ( the breathing passages). While increasing the dose to the tumor, HDR, due to its short treatment distance, minimizes the radiation dose given to sensitive nearby tissues such as adjacent normal lung, heart, esophagus and the spinal cord. HDR brachytherapy is also used to treat recurrent endobronchial tumors where additional surgery and external beam radiation therapy are no longer options. "In cases of the tumor being in the lung tissue, rather than the bronchi, external beam radiation therapy, not HDR, is the appropriate therapy." 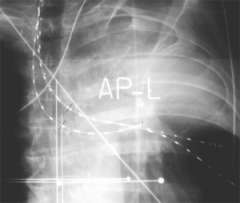 AP (front) radiograph of three treatment catheters placed in the bronchi to encompass the lesion that is obstructing air from reaching the left upper lobe of this patient. After the treatment, the catheters are removed, the patient recovers quickly and then goes home. Usually, three or four treatments are given. Successful treatment opens the bronchi, (improving breathing), and reduces bleeding (hemoptysis). 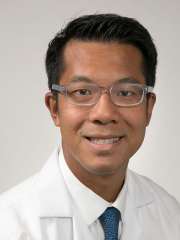