Our experts offer a comprehensive suite of image-guided techniques to treat cancers of the liver, kidney, lung, musculoskeletal and other solid malignancies. Call 310-481-7545 to schedule a consultation or procedure.

Find a provider
Request an appointment
Find a location

Precise tumor ablation is possible today due to imaging expertise and image guidance technology and skills and that enable safe placement of specialized needles or probes into the tumors. Ultrasound, CT, and even MRI can be used alone or in combination for guidance. Radiofrequency and microwave Ablation (RFA and MWA respectively) are the most mature & commonly utilized thermal ablation devices today. Both work based on heating to kill cancer cells. 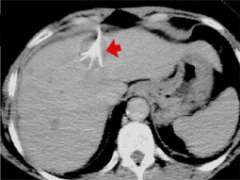 Figure 1: Under CT guidance, a multiple array needle probe is inserted into the center of the liver tumor. After the individual electrodes are deployed from the hollow core of the needle, an alternating current is applied through the needle and electrodes. The tumor cells are killed as the current passes into the tissue at the electrode tips

Figure 2: CT images of a liver tumor caused by colon cancer that spreads to the liver, the RFA lesion 1 hour after the treatment, and the scar 6 months after the RFA treatment

In radiofrequency ablation, a needle probe under ultrasound, CT, or even MRI guidance is inserted into the center of the liver tumor (fig.1). An alternating current (oscillating in the radiofrequency spectrum, hence the name) is applied through the needle, which passes through tissue to grounding pads placed on the thighs or to another electrode. As the current passes into the tissue at the needle tip, ionic agitation creates frictional heating in the tissue and tumor cells are killed.

Microwave ablation uses energy also within the radiofrequency spectrum (therefore often viewed as a type of RFA), but at a higher frequency. It works by direct oscillation of water molecules in tissue and heats faster and to hotter temperatures than RFA. There is no need for grounding pads.

To make sure that all tumor cells are destroyed, the ablation is extended beyond the tumor margin by about 0.5 to 1.0 cm. The post-ablation lesion, therefore, is larger than the original tumor size (fig.2). The ablation lesion eventually shrinks into a much smaller scar, if there is no recurrence.

These minimally invasive procedures allow patients to go home the same day or after an overnight hospital stay. There are only minimal side effects and major complication rate is minimal at 1-3%.

After abaltion, patients proceed to the post-anesthesia care unit for recovery. A post-procedure imaging scan may be performed to determine the effect of the ablation. Most patients are discharged home the same day or next day. Antibiotics and/or pain medications may be prescribed to prevent pain or infection after the procedure.

Patient follow-up is performed in conjunction with the primary and referring physicians after discharge. In addition to routine follow-up of any tumor markers, specific imaging type and schedule depends on tumor location and type, but usually first follow up with CT or MRI by 1-3 months, and surveillance can be every 3-6 months PET-CT is used in PET positive tumors such as colon cancer. Strict follow-up is critical as residual or recurrent tumor should be detected when they are still small, when another simple percutaneous ablation could be performed without much additional risk to the patient.

For more information or to schedule an appointment with one of our IR physicians, please call 310-481-7545.