ViewRay and the MRIdian MRI-guided LINAC

What is MRI-guided radiation? 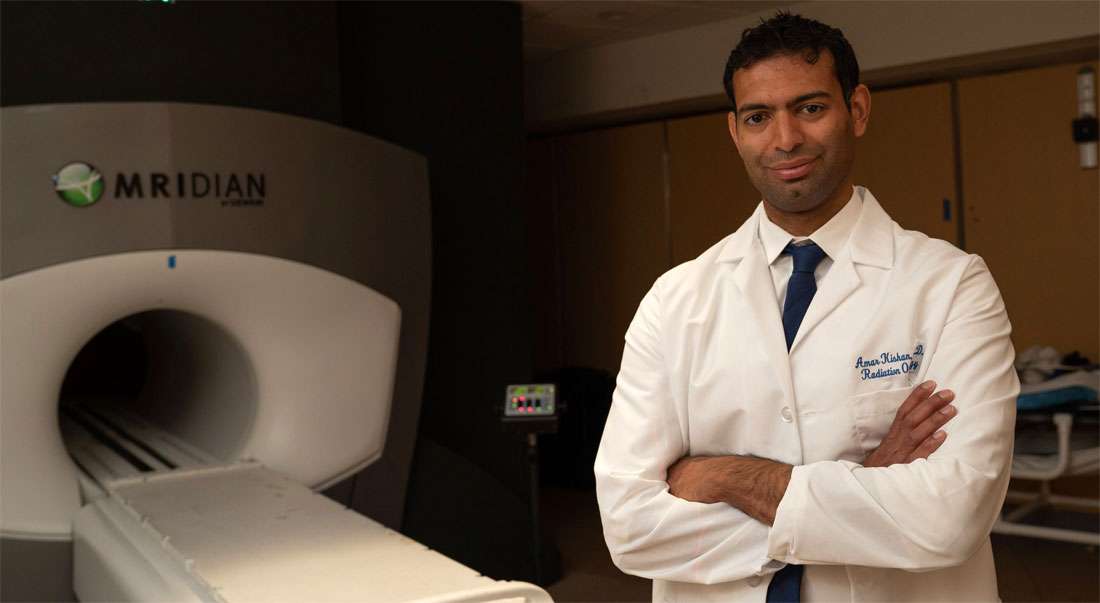 Historically, this imaging has been X-ray or CT-based. However, MRI imaging offers significantly better resolution and contrast in many anatomical areas than either X-ray scans or CT-scans. This is intuitive, as often times MRI scans are used to better visualize anatomy in the cancer diagnosis and staging process because of this improved contrast and resolution. Historically, it has been difficult to combine an MRI with a linear accelerator that delivers radiation therapy due to interactions between the magnetic field of an MRI and the linear accelerator itself as well as the dose delivered by the photon beam. This interference has finally been solved with the advent of MRI-guided linear accelerators. With MRI-guided radiation, an MRI is thus integrated into the linear accelerator that delivers radiation, allowing enhanced precision and accuracy.

How does the MRIdian improve precision and accuracy?

The MRIdian does this in three ways.

What cancers are treated with MRI-guided radiotherapy?

While in theory, the advantages of MRI-guided radiotherapy apply broadly, the most frequent cancers we treat with the MRIdian at UCLA are cancers of the prostate, liver, and pancreas. The MRIdian can also be used for other cancers of the genitourinary and gastrointestinal systems, and for lung cancers as well. You can discuss treatment with the MRIdian with your doctor.

Are there data to support that MRI-guided radiation offers an advantage over standard radiation?

Yes, there are data to support MRI-guided radiation. As an academic institution and research hospital, UCLA is interested in evidence-based medicine and data-drive practices. Perhaps the best, and strongest, example of this is the MIRAGE trial, which was a randomized trial run from May 2020 to September 2021 by Dr. Amar Kishan, who leads the genitourinary radiation oncology service. 156 patients with prostate cancer who were receiving a type of radiation called stereotactic body radiotherapy were randomly assigned to receive treatment with the MRIdian, versus with a standard linear accelerator. The early analysis of this trial showed a dramatic reduction in side effects with the use of the MRIdian, and final results are anticipated in the fall of 2022. As a result of the favorable early results, MRI-guided radiation has become the standard offering for almost all patients with prostate cancer getting stereotactic body radiotherapy at UCLA.

How can I learn more about MRI-guided radiation at UCLA?

If you’d like to learn more about MRI-guided radiation at UCLA and whether it will be the right choice for you or a loved one, please schedule an appointment with one of our radiation oncologists.