A critical component to managing high risk prostate cancer is determining the appropriate stage. With our state-of-the- art imaging techniques (MRI and PSMA), we are better able to risk stratify which patients benefit from local versus systemic treatment. This is critical given that conventional bone scan imaging often underestimates the stage in many patients.

Given the significant risk of recurrence for high-risk prostate cancer, we also offer a number of clinical trials that men can enroll in to help improve the treatment of this aggressive disease.

Robotic prostatectomy is offered by urologists at UCLA as a treatment approach for patients with high risk prostate cancer. It is a minimally invasive treatment with less blood loss and a more rapid overall recovery. Our surgeons at UCLA have extensive experience in treating high risk prostate cancer patients, having completed more than 3,500 robotic prostatectomies since the program began in 2003. We use the newest, cutting edge techniques to remove the cancer while preserving both sexual and urinary function.

Surgery techniques for radical prostatectomy include prostate nerve-sparing. Due to our cutting-edge imaging, especially MRI, our surgeons are often able to still perform nerve sparing in high risk patients. We rely heavily on the collaboration with radiologists to help determine where in the prostate the cancer is located. If the nerves are safely away from the prostate cancer then we will still perform nerve-sparing dissection. Some high risk cancers, however, will require more extensive surgery.

External beam radiation therapy involves a series of daily treatments to accurately deliver radiation to the prostate. Treatment planning and delivery techniques such as intensity modulated radiation therapy (IMRT) can be utilized to control the dose of radiation to the desired treatment area in the prostate, allowing for optimal treatment while reducing the risk of exposure to the surrounding healthy tissue. Successful treatment requires coordination between the UCLA physicians, medical physicists, and therapists.

Many patients who have no other FDA approved treatment options available often consider participating in clinical trials. Clinical trials test experimental treatments, new combinations of drugs, or new approaches to surgery or radiation therapy. Clinical trials are commonly classified into several phases, each having a different purpose. In phase I studies, researchers test an experimental drug in a small group of people to determine a safe dose, or to evaluate its safety and side effects. In phase II studies, the treatment is tried in larger groups of patients or in specific diseases to further evaluate its safety and efficacy. Phase III studies are used to compare the efficacy of the new treatment to an existing approved treatment. Placebos, or “sugar pills,” may be used as the comparison to the investigational treatment in clinical trials for diseases that have no approved treatment. If the drug successfully passes through all 3 phases, it will usually be approved by the FDA for use in the general population.

Many currently approved drugs such as Xtandi, Zytiga, and Provenge were available to UCLA patients participating in clinical trials years earlier than they would have been otherwise had they needed to wait for approved by the FDA.

Thernostics is a form of treatment that combines modern imaging techniques with targeted tracers to treat prostate cancer. These is still an investigational form of treatment but given our expertise in PSMA imaging, our Nuclear Medicine department is on the forefront on this protentional treatment options. UCLA is part of several of the clinical trials that are trying to bring this treatment into routine clinical practice.

The majority of the male hormone testosterone is produced by the testicles, and the surgical removal of the testicles was once a common way to treat advanced prostate cancer. However, because it requires surgery and is irreversible, nearly all men today choose drug therapy instead.

Gonadotropin-releasing hormone (GnRH) analogues (also called LHRH, or luteinizing-hormone releasing hormones) such as leuprolide (Eligard, Lupron, and Viadur), goserelin (Zoladex), and triptorelin (Trelstar) suppress production of testosterone by the testicles, while antiandrogens such as such as bicalutamide (Casodex), flutamide (Eulexin), and nilutamide (Nilandron) block the effects of testosterone in the body. These two different kinds of drugs are often given together. There are now newer forms of antiandrogens such as Xtandi (MDV-3100, enzalutamide) and drugs such as Zytiga (abiraterone) are able to block testosterone production in not only the testicles, but in other areas of the body such as the adrenal glands and the tumor itself. Abiraterone is now approved for administration for men for men who present with evidence of metastatic prostate cancer, providing an alternative to chemotherapy.  Regardless of the specific type of hormone therapy, side effects common to all these drugs include hot flashes, mood swings, loss of sex drive and erectile dysfunction, heart problems, and loss of bone density and muscle mass with long-term use. For men with cancer that has spread to the bone, drugs such as Zometa (zoledronate) and Xgeva (denosumab), help treat osteoporosis and can prevent or delay the skeletal complications associated with the spread of prostate cancer. 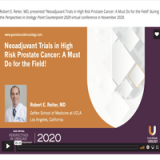 Robert Reiter, MD
“Neoadjuvant Trials in High Risk Prostate Cancer: A Must Do for the Field”
Video >