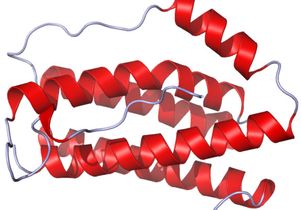 Interleukin 6 is one of the inflammatory molecules in the blood associated with depression.

People with major depression that has not been well controlled by medications and who have a biomarker in their blood indicating a higher level of inflammation may benefit more than people with less inflammation from electroconvulsive therapy to ease symptoms of their depression, according to a new UCLA study.

Inflammatory molecules in the blood, such as C-reactive protein and interleukin 6, are associated with depression, and higher levels of inflammation predict that people won’t respond as well to antidepressant medications as other people do.

Scientists wanted to see if levels of inflammatory molecules could predict how well people with treatment-resistant depression would respond to electroconvulsive therapy. ECT, which involves a brief electrical stimulation of the brain while the patient is under anesthesia, is a highly effective treatment for major depression for some patients. But nearly one-third of the people who undergo ECT fail to respond.

Researchers evaluated levels of inflammatory markers in the blood, and the severity of depression symptoms, in 29 people with major depressive disorder who already were scheduled to undergo ECT. Depression symptoms were scored using a standard rating scale. Researchers measured the biomarkers before the treatment, after the second ECT session and after the final session. The researchers focused on biomarkers that are consistently elevated in some people with major depression: interleukin 6, interleukin 8, C-reactive protein and tumor necrosis factor-alpha.

The first author is Dr. Jennifer Kruse of the Cousins Center for Psychoneuroimmunology at UCLA and the UCLA Semel Institute for Neuroscience and Human Behavior. The senior author is Dr. Michael Irwin, director of the Cousins Center, a member of the Semel Institute and a professor of psychiatry and biobehavioral sciences. The other authors are Eliza Congdon, Richard Olmstead, Stephanie Njau, Elizabeth Breen, Katherine Narr and Dr. Randall Espinoza, all of UCLA.

The study appeared Feb. 27 in the Journal of Clinical Psychiatry.

The study was supported by funding from the National Institutes of Health and the NIH’s National Center for Advancing Translational Sciences.