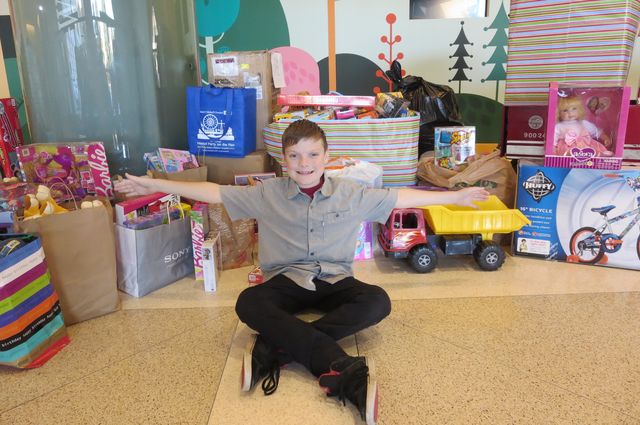 Casey Abrams, 11, has organized toy drives for UCLA Mattel Children's Hospital for the past four years. On Monday, he delivered roughly 1,000 toys to the hospital where he has spent many holidays and birthdays and built a special bond with the hospital staff and volunteers

Casey Abrams is only 11 years old, but he managed to deliver approximately 1,000 toys to the Chase Child Life program at UCLA Mattel Children’s Hospital Monday.

Casey, who suffers from a very rare progressive and degenerative disease of his intestines, has been a frequent patient at UCLA since birth. His life is threatened by this disease and the complications that come along with it. Since he has had to spend many holidays and birthdays in the hospital, he has formed a very special bond with the doctors, nurses, staff and volunteers.

Five years ago, he decided that he wanted to give the other kids at the hospital an awesome holiday. So he started collecting donated toys from community groups, ranging from a Brownie troop to car and motorcycle clubs, Uncle Milton Industries and Wish Sotheby's International Realty. This was the fifth annual toy drive Casey organized. The Chase Child Life program not only distributes toys during the holiday season, but also on patients’ birthdays and when they undergo procedures.