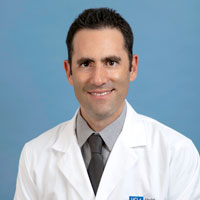 Dr. Craig Gluckman is a gastroenterologist who practices in West Hills and a clinical instructor of medicine in UCLA Health’s Digestive Diseases department. He has a special interest in esophageal and gastrointestinal motility disorders and is board certified in internal medicine and gastroenterology.

Dr. Gluckman was born and raised in South Africa and received his medical degree from the University of the Witwatersrand in Johannesburg. After a year of internship and community medical service, he completed his internal medicine residency through the College of Physicians of South Africa, and then worked for several years as an internist in private practice.

Dr. Gluckman relocated to the United States in 2012, after which he completed both an internal medicine residency and a gastroenterology and hepatology fellowship at Mount Sinai Beth Israel Hospital in New York. He then pursued additional fellowship training in esophageal and swallowing disorders at the University of Pennsylvania before joining UCLA Health in 2019.

In addition to his clinical practice, Dr. Gluckman conducts clinical research on esophageal and gastric disorders, which he has published in peer reviewed journals and presented at the annual Digestive Diseases Week and American College of Gastroenterology conferences. He is a member of the American Neuro-Gastroenterology and Motility Society.

When he’s not working, Dr. Gluckman enjoys spending time with his wife and young son. He is also a keen sportsman, who enjoys watching cricket, rugby and soccer.

Craig Gluckman, MD click here to update your profile
Back to search