Realizing that very few products exist to counter the acute and long-term injuries related to nuclear or radiological attacks, the National Institute of Allergy and Infectious Diseases (NIAID) expressed the importance of developing a comprehensive program of basic and translational research with a particular focus on drug development and radiation biodosimetry. To address these ends, in 2004 NIAID announced their Centers for Medical Countermeasures Against Radiation (CMCR) program and released the first funding announcement requesting proposals from investigators to establish CMCRs to support basic, translational and applied research that will lead to the discovery of new medical countermeasures against radiological and nuclear exposures due to terrorist attacks and ways to assess the extent of damage. Led by Dr. William McBride in the Department of Radiation Oncology, UCLA successfully received one of 6 CMCR grants in the U.S., in 2005, followed by a 5 year renewal in 2010, and a third renewal in 2015.

With the third successful renewal in 2015 and a new leadership structure, including Drs. William McBride, Joanne Weidhaas and John Chute, the UCLA CMCR is entering its 11th year of conducting radiation mitigation research. Over the years, research efforts focused on an unbiased approach to drug discovery that employed high throughput screening (HTS) of libraries of chemically defined and bioactive small molecules. UCLA CMCR investigators, working with industry collaborators, have refined and extended the range of agents to be tested.

A new element to the CMCR for the 2015-2020 program term is the introduction of a consortium structure. In addition to 4 CMCR centers across the country located at UCLA, Duke University, Colombia University and the University of Pittsburgh dedicated to accelerating the development and production of medical countermeasures, each center also runs Consortium-wide Cores. These cores work in concert to ensure that all program objectives are met. 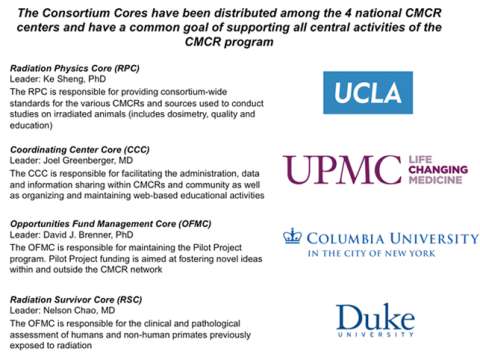 Together with unique UCLA resources, 3 research projects and 3 cores form an infrastructure that promotes discovery, exploitation, and evaluation of novel products. The Radiation Oncology gnotobiotic animal colony has been a major component of the CMCR Animal Core. The UCLA Molecular Screening Core and the Pasarow Mass Spectrometry Lab have been integral to the CMCR from the beginning. The projects have been designed to be complimentary in nature so to encourage cross talk and collaboration among UCLA researchers and trainees. The cores have similarly been designed to support the projects to ensure that research outputs are translated into viable drug candidates.

The UCLA CMCR is a highly collegial group of over 100 investigators across several departments. The research team meets monthly to discuss research progress, and coordinates and executes education sessions and workshops.

One of the significant achievements of the UCLA CMCR is the development of a highly successful Pilot Seed Grant program over the last 10 years. The UCLA CMCR Pilot Grant program has supported young investigators by awarding 47 grants involving 21 different departments totaling over $5 M dollars. This program has been critical in supporting young investigators and trainees as they launch their independent research careers. With new changes to the CMCR program nationally, NIAID has developed a Consortium component that will manage Pilot Grants for all CMCRs across the country over the next five years (2015-2020). For information on funding cycles and grant submissions please contact Kate Angelis ([email protected]).