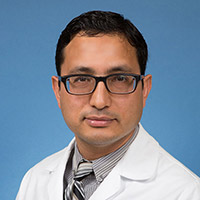 Dr. Chhetri is known nationally and internationally as an academic laryngologist and head and neck surgeon. He has authored nearly 100 publications related to voice and swallowing disorders. He has been consistently funded by the National Institutes of Health (NIH) for his research in the topic of neuromuscular control of the larynx and voice disorders. He has special interest in caring for those who rely primarily on their voice in their profession (Care of the Professional Voice), vocal cord paralysis, neurologic voice problems, as well as benign and malignant growths of the larynx and surrounding structures causing voice, swallowing, and breathing problems.

Dr. Chhetri is also an international authority on swallowing disorders, having published the seminal book "Dysphagia Evaluation and Management in Otolaryngology" and given many invited lectures around the world on swallowing disorders related to neurogenic and obstructive causes, as well as radiation therapy for head and neck cancer. He is also certified in Transoral Robotic Surgery (TORS) for head and neck cancer.

Dr. Chhetri currently serves as Vice-Chair of the UCLA Department of Head and Neck Surgery, Director of the UCLA Swallowing Disorders Program and the UCLA Head and Neck Cancer Survivorship Program, and co-director of the Laryngology program. He also volunteers externally as council member of the American Laryngological Association, and grant reviewer for national institute of health. In addition, he is passionate about training surgeons throughout the world and has led many international medical missions to South Asia.

His main focus in the Laryngeal Physiology Laboratory is evaluation and treatment of voice problems related to laryngeal posture and vibration, including study of laryngeal asymmetries such as vocal fold paresis and paralysis, as well as vocal fold vibratory abnormalities related to scar, tissue loss, vocal fold neoplasms, and tension asymmetry. His current research focus in the Swallowing Disorders Center is prevention dysphagia in patients undergoing chemoradiation therapy for head and neck cancer.

Dinesh K. Chhetri, MD click here to update your profile
Back to search