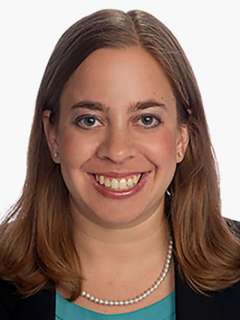 Rebecca grew up in Cincinnati, Ohio and attended college at Washington University in St. Louis, where she pursued a double major in English literature and biology and a minor in Spanish. She subsequently obtained a master’s degree in narrative medicine at Columbia University and continued her studies in medicine at Columbia University Vagelos College of Physicians and Surgeons. She was excited to attend residency in internal medicine and pediatrics at UCLA and has enjoyed being involved in the Medical Education Pathway, medical humanities initiatives, as well as research and QI projects related to adolescent and young adult health. She hopes to pursue a career that combines her interests in primary care, medical education, and health services research.

Becca is honored to have been chosen to work with such a talented, passionate, and inspiring group of residents, faculty, and co-chiefs in her role as Primary Care Chief Resident. Outside of work, she enjoys spending time with friends and family and exploring LA's diverse art, nature, and food scenes.

Chief Resident in Quality and Safety 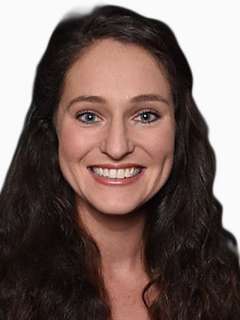 Dr. Yuliya Zektser, originally from Ukraine, grew up bi-coastal moving from Connecticut to California during high school. After attending college at UC Berkeley, she was sold on the west coast. However, her major in molecular and cell biology led her to work in a cancer genomics lab in Boston. She then came back west to UCLA for medical school and hasn’t been able to leave ever after! Yuliya has done a mix of research spanning from basic sciences to health delivery projects. She is very excited to take on her role as QI chief. In her free time, she loves exploring Los Angeles’s neighborhoods, traveling domestically and abroad, skiing, playing tennis, ocean-swimming, and spending time with her family in San Diego. 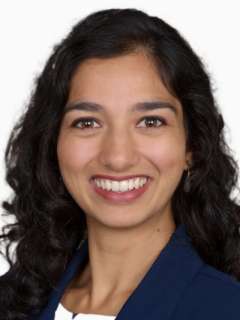 Roshni is delighted to be an incoming internal medicine chief resident. Her interests lie in resident research and scholarship, mentorship, ultrasound, and EDI. Her clinical and research interests are in preventative cardiology and health services research focused on improving the delivery of high-value, equitable care. During residency she enjoyed being involved in the Health Systems Management Pathway, the Women in Medicine group, and playing the drums for the residency band, Ultrasound. She received her BA and MD from Northwestern University prior to shedding her winter coats for sunnier days in LA. Outside of work, she enjoys dancing, running by the beach, and playing with other people's dogs. 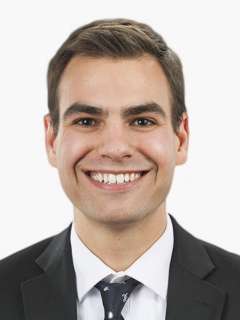 Patrick grew up primarily in Austin, TX and San Diego, CA. He attended UC San Diego for college where he majored in Bioengineering. He then moved across the country to Chicago Medical School/Rosalind Franklin University where he was heavily involved in student government. He returned to southern California for a combined Internal Medicine & Pediatrics residency at UCLA. He has loved his training at UCLA because of the wonderful people, stellar clinical training with diverse training sites, dedication to education, and limitless opportunities for scholarship. In residency, he participated in the Medical Education program where he created a clinical coaching program for students which he plans to expand through the UCLA Medical Education Fellowship this upcoming year. He also participated in the resident informatics program, various clinical research & QI projects, recruitment efforts, and Spectrum, the Internal Medicine LGBTQ+ group. He is so excited to serve as a chief resident where he can give back to the program, help support residents, and develop as a clinical educator. He has found his calling in Pulmonary & Critical Care Medicine and will be applying this year. Outside of the hospital he enjoys spending time under the sun running along the beach, hiking, and exploring national parks. He considers himself an Earl Grey connoisseur and is working to perfect the London Fog latte. He also enjoys seeing live music, traveling the world, baking with dark chocolate and peanut butter, and re-watching Parks & Rec with his spouse and two tuxedo cats. 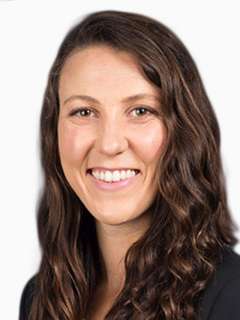 An ocean lover from San Diego who thrives on new adventure, Rachel went to the University of Chicago for college where she majored in Biology and minored in the History, Philosophy, and Social Studies of Science and Medicine. She then spent two years doing translational research at the NIH via the Post-Baccalaureate Intramural Research Training Award Program, where she integrated her bench research with a developing passion for health disparities. She returned to California for medical school at UCLA and chose to stay for the rigorous clinical training, diverse patient population, and palpable sense of community. She is thrilled to serve as a Ronald Reagan and Santa Monica chief resident this year, and hopes to make contributions to the program’s curricular innovation, medical education, and commitment to wellness. She plans to apply to Cardiology fellowship and envisions an academic cardiology career dedicated to the equitable care of critically ill patients with cardiovascular disease. She and her husband Francis (and now their Rhodesian ridgeback Leo) look forward to maximizing their ocean, mountain, and cultural explorations in the City of Angels. 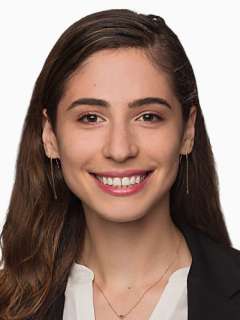 Rachel hails from New York City, where the tenacity, gritty energy, and the kaleidoscopic diversity of people and experiences formed her foundation. She traveled north to Brown University for college where she studied Health and Human Biology and developed her love of science and interpersonal relationships, eventually returning to NYC for medical school at NYU. Seeking new adventure in California, she was ecstatic to be able to train at UCLA.. Her ‘gut feeling’ that the program would be the ultimate combination of rigorous and supportive, proved truer than she could ever imagine. She feels that she’s found her people and her place. During residency, she nurtured a passion for teaching, communication, and helping learners grow. She especially delighted in mentoring interns and medical students in formal and informal capacities and participating in theMedical Education Pathway, where she spearheaded a project aimed to improve peer feedback on inpatient rotations. Outside the hospital, she was one of the proud lead singers of UCLA IM’s Ultrasounds Band. Now, she is delighted to give back to UCLA as a chief and aims to focus her efforts within the realms of medical education/communication, mentorship, and medical humanities. After chief year, she plans to create her own fellowship in disorders of brain-gut interactions (DGBIs). Outside the hospital, you can find Rachel hosting a dinner in her backyard, dressing up a little too seriously for themed parties, listening to a podcast, playing charades with her family, traveling, or singing at the piano with her fiancé, Nolan. 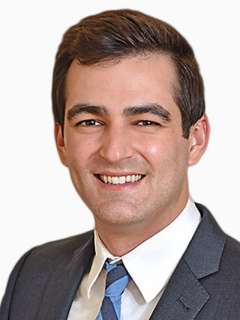 As a Pasadena native, Cameron always planned to return to Los Angeles for residency after obtaining his undergraduate degree in Anthropology from Princeton University and his MD from Boston University School of Medicine. His clinical and research interests include gastroenterology, metabolic diseases, and the effect of chronic diseases on patients' psychosocial wellbeing. In his role as Chief Resident, Cameron leads the ambulatory curriculum for the Categorical Internal Medicine program. Outside of work, he enjoys swimming, hiking, language learning, and struggling with the New York Times' Saturday and Sunday crosswords. 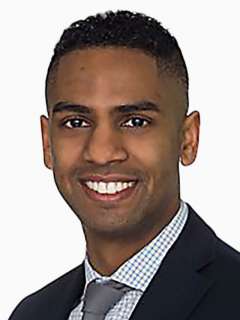 Brandon was born and raised in Oakland, California. He spent much of his early childhood running around the forests of the Oakland Hills with his brother and cousins, and his later childhood playing competitive soccer all over California. He attended college at Harvard University where he studied Human Evolutionary Biology and Spanish. After graduating, Brandon worked for an agricultural development nonprofit in rural Tanzania, where his work centered around managing a small chicken business with local Tanzanian partners. He then returned to complete his medical degree at the Warren Alpert Medical School of Brown University before finally returning to the West Coast to start his residency training at UCLA. Brandon has enjoyed participating in the Health Systems and Management Pathway and working with the Internal Medicine Resident Equity, Diversity and Inclusion committee (IM REDI) during residency. His career interests include both clinical medicine as well as administration and leadership within medicine. This year, Brandon is excited to serve as one of the Chiefs of Equity, Diversity, & Inclusion (EDI) for the residency program. Outside of work Brandon enjoys playing soccer, finding the best almond croissants in LA, and spending time with his fiancé Katie and labradoodle Leo. 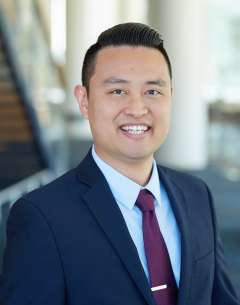 George grew up in Fountain Valley, California where he developed a love for basketball and the Los Angeles Lakers, tennis, and music. He obtained a B.S. in biological sciences at UC Irvine, and then attended medical school at Duke University. He was thrilled to be able to return to Southern California for internal medicine residency at UCLA and plans to pursue a fellowship in palliative care. He has interests in resident wellness, medical education, and healthcare access and affordability. In his free time, he can be found exploring new restaurants, playing the guitar, watching musicals, or playing tabletop board games.