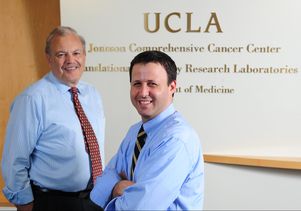 Building on earlier clinical trials, UCLA researchers have confirmed that the “breakthrough” drug palbociclib when used in combination with the traditional hormonal therapy letrozole delays progression of advanced breast cancer significantly and without the harsh side effects seen in some women prescribed letrozole alone.

The study, published online today in the New England Journal of Medicine, is the phase 3 study following phase 1 and phase 2 clinical trials that led to U.S. Food and Drug Administration approval of palbociclib in early 2015. Palbociclib was also approved in Europe for the first time earlier in November based on these results. In 2013, after women in a clinical study led by UCLA researchers showed a dramatic improvement, the FDA granted palbociclib “breakthrough therapy” status, allowing it to be fast-tracked for approval.

The drug combination is the first and only treatment for women with estrogen-receptor–positive breast cancer to show such significant results in a randomized phase 3 trial. Dr. Richard Finn and Dr. Dennis Slamon of the UCLA Jonsson Comprehensive Cancer Center led the laboratory studies and previous trials and are co-authors of the study.

“These results are a truly meaningful advancement for women in this patient population,” said Finn, who is also an associate professor of medicine in the David Geffen School of Medicine at UCLA. “The results of the phase 3 study will support the full approval of palbociclib in the United States and around the world.”

Palbociclib (marketed as Ibrance by Pfizer) is known as the first new drug that in combination with hormonal therapy has proven to be very effective in post-menopausal women with estrogen receptor-positive breast cancer. Estrogen-receptor–positive (ER+), human epidermal growth factor receptor 2-negative (HER2-) breast cancer subgroup represents the largest proportion of breast cancer cases and is traditionally treated with therapies, like tamoxifen or letrozole, that target the hormone receptor pathway. Palbociclib, which was developed by Pfizer, prevents cells from dividing by targeting a key family of proteins (CDK4/6) responsible for cell growth.

Led by Finn and Slamon, an international team of investigators from 17 countries analyzed 666 women with advanced ER+/HER2- breast cancer. The people were treated with a combination of palbociclib and letrozole, and had not received prior systemic therapy for their cancer. The results of the new study confirmed the previous findings of the multi-year phase 1 and phase 2 trials, which showed a significant increase in progression-free survival, meaning without the cancer worsening, compared to letrozole alone.

The phase 2 trial also demonstrated that survival without side effects nearly doubled — 20.2 months for women who received palbociclib plus letrozole compared to 10.2 months in patients who received letrozole alone — representing a 42 percent reduction in the risk of disease progression. The new phase 3 trial further confirmed these findings.

“The results from both studies are really remarkable for the degree of benefit they provide in slowing the growth of estrogen-receptor positive breast cancer,” said Slamon, director of the Revlon/UCLA Women’s Cancer Research Program and director of clinical and translational research at the Jonsson Cancer Center. “The drug combination is very well tolerated and without the side effects of traditional chemotherapy, such as infections, nausea and significant hair loss.”

Palbociclib is the first CDK 4/6 treatment to be approved for cancer treatment and provides proof of concept that targeting this pathway is important for the treatment of women with ER+ breast cancer. The researchers said the phase 3 findings will open the door to further studies in breast cancer and other diseases. Besides leading the clinical development, the initial scientific observation that drove the development of palbociclib and other CDK 4/6 inhibitors in breast cancer came out of work from the UCLA Translational Oncology Research Laboratories under the direction of Finn and Slamon.

Funding for the phase 3 clinical trial was provided by Pfizer. Finn is a consultant for Pfizer and Slamon has stock in the company.