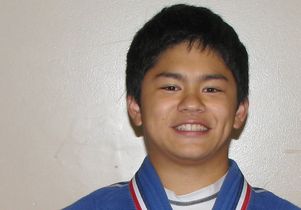 Myles Honda, a 16-year-old from Torrance, California, was ranked No. 1 in the nation in judo for his age and weight class. He had even earned the nickname “Giant Killer” from an opposing coach thanks to his uncanny ability to take down much taller opponents.  But fatigue and weakness in his left arm had started to sideline him.

Concerned, his parents had him evaluated by Dr. Ruey-Kang Chang of the David Geffen School of Medicine at UCLA. Chang recognized that Myles likely had a circulation problem and referred him to the UCLA Aortic Center.

There, a comprehensive medical team — including Dr. Hillel Laks, a cardiothoracic surgeon; Dr. Daniel Levi, a pediatric cardiologist at UCLA Mattel Children’s Hospital; and Dr. William Quinones-Baldrich, a vascular surgeon — concluded that Myles’ symptoms were caused by decreased blood flow to his left arm and side.

Computed tomography (CT) scans revealed the reason: The main artery to Myles’ left arm was not properly connected to the aorta, the main artery from the heart that supplies the body with oxygen-rich blood. The scans also showed Myles was born with a narrowed aorta.

“Myles wasn’t receiving sufficient blood to the left side of his body and arm, especially during strenuous physical activity, which was causing his symptoms,” Levi said.

The lack of normal blood flow had left his left arm slightly shorter than his right and without a measurable blood pressure. Without a major artery delivering blood to his left arm, Myles’ body had been compensating with smaller collateral arteries, but doctors said that simply wasn’t enough to keep him healthy given his high level of physical activity.

Quinones-Baldrich made the final evaluation of Myles’ case with his team. The narrowing in the aorta was not significant, but the lack of circulation to his left upper extremity needed to be addressed.

To improve Myles’ circulation, the team led by Quinones-Baldrich performed a unique operation, joining his unconnected arm artery to his left carotid artery. Since the carotid artery is directly connected to the aorta, this effectively restored blood flow to the newly connected arm artery. Instantly, normal blood flow returned and, for the first time, Myles registered a normal blood pressure in his left arm.

“It is a rare occurrence for someone this young to have symptoms due to poor circulation.  More often this problem is seen in older patients,” said Quinones-Baldrich, professor of vascular surgery and director of the UCLA Aortic Center. “The athletic demands on his body called attention to this issue early. Fortunately, the narrow part of the aorta was not causing symptoms and therefore did not require intervention. We’re pleased that his surgery was a success.”

Myles’ doctors will continue to monitor his health but now that he's free of symptoms, Myles is happily back in training — with their blessings.

The son of a judo instructor and coach, Myles grew up around the martial art and has been in training since he was four. His dad, Alan, says Myles always had an affinity for judo, and that he took some of his very first steps on a judo mat while watching his older brother practice.

“We are just so relieved that Myles is symptom-free and able to pursue again what he loves,” Alan said, adding that his son’s usual enthusiasm and focus have returned since the surgery.

Myles holds a brown belt and is planning to train for a black belt — judo’s highest rank. He is also lifting weights and getting back into competing. His signature judo move is a traditional throw technique executed at the hip level that is difficult for opponents to stop. Southern California judo fans are now saying that the Giant Killer is back.

Said Myles: “I like feeling fit and healthy, and I just want to get better overall.”