In recovery from sports concussions, state of mind really does matter 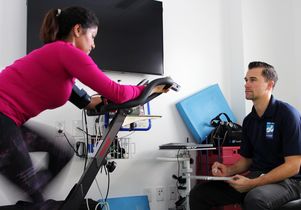 When a student-athlete suffers a concussion, one of their biggest concerns is getting back to the playing field as soon as they are well. While the physical symptoms of their brain injury may fade after a week or two, for a small minority of them the emotional recovery is longer and more complicated.

Researchers at UCLA have been taking a closer look at the psychological aspects of recovery from head injuries and have recently begun a program that integrates a common type of talk therapy as part of their treatment for athletes with lingering emotional impacts after their injuries.

“Generally speaking, the psychological aspects of concussion are under recognized,” said Doug Polster, a postdoctoral fellow in sport neuropsychology for the UCLA Steve Tisch BrainSPORT Program. “Many health care professionals either do not have the time or are not fully trained to check for depression symptoms, and if the patient’s symptoms are below the threshold for clinical depression, they can be missed.”

Most people who suffer a concussion will recover from their physical injury in a week to several weeks. But for some, concussion injuries produce a set of symptoms, both physical (headaches, dizziness, sensitivity to noise and light), and psychological (anxiety, depression and social isolation) that can last much longer than a few weeks.

One of the most common psychological symptoms reported by athletes, Polster said, is feeling isolated from their team, after they’ve been instructed to stay at home and not participate in games, practices and perhaps other team events. Athletes who report that their personal identities are most closely tied to their participation in a sport tend to feel isolation and depression more intensely.

“All of a sudden a month goes by and you’re not socializing much,” Polster said. “Feelings of anxiety or depression can be exacerbated by separation from the team, the pressure of falling behind on academics — athletes may be excused from classes for a week or so as they recover — and just the general stress of being a student.”

Another issue affecting some athletes is that, even after they’ve largely recovered from a head injury, they may link common physical symptoms — headaches, forgetfulness or trouble concentrating — with the recent injury. “It can become difficult to parse out what is an everyday symptom of life with something concussion-related,” Polster said.

To address some of the psychological aspects of depression and anxiety, in December 2016 the BrainSPORT program launched a program in which patients experiencing longer-than-typical recovery periods from concussion are provided with a form of counseling known as cognitive behavioral therapy, with a sports twist. The therapy is provided by counselors who talk to the athletes while they are exercising on a stationary bike or practicing aspects of their sport, such as shooting free throws for basketball players.

“Our goal is to give you the techniques to cope with stress better so that once you are healthy, you are able to perform your best,” Polster said. The program hopes through its research to develop some recommended treatment protocols for addressing the psychological effects of brain injuries.