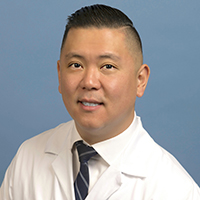 Dr. Jason Bahk is a hospitalist who practices in Santa Clarita and Burbank. He is board certified in internal medicine, specializing in the care of complex acute care patients who warrant admission to the hospital. He is fluent in Korean and Spanish and enjoys being an advocate for his patients in the hospital.

Dr. Bahk received his medical degree from Oregon Health & Science University in Portland, Oregon, completing his post graduate training, both internship and residency in internal medicine at Olive View UCLA Medical Center, a UCLA affiliate program. He was named outstanding junior resident of the year in 2015, and won a teaching award for outstanding teaching as a senior resident in 2016. He received his undergraduate degree from Cornell University, specializing in molecular biology and his graduate degree from the Division of Graduate Medical Sciences from Boston University.

Aside from clinical practice, Dr. Bahk enjoys advocating for evidence based medicine best practices, editing papers for the Annals of Internal Medicine, and being involved in teaching procedural competency for internal medicine residents and point of care ultrasound instruction, both in the residency program and at the national level with the American College of Physicians.

When he's not in the office, Dr. Bahk enjoys spending time with family, working out at his local CrossFit gym, and being a CrossFit coach as well as a L1 trainer, as well as volunteering to serve immigrant populations in Los Angeles and helping the underserved.

Outstanding Junior Resident of the Year, 2014-2015
Outstanding Resident in Teaching, 2015-2016
Fellow of the American College of Physicians

Jason Bahk, MD click here to update your profile
Back to search