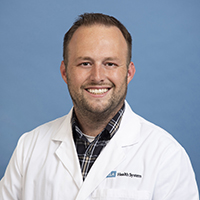 Dr. Cates grew up in Dallas, Tex. as the oldest of five kids. After high school, he moved to San Angelo, where he received his bachelor's degree in biology at Angelo State University. He then earned his Master of Public Health from Texas A&M School of Rural Public Health before starting medical school. He met his now husband when completing a clinical rotation in LGBTQ and HIV care in Dallas—an experience that sparked his interest in LGBTQ health.

During his residency training, Dr. Cates saw significant health disparities, including a lack of resources, provider training and education on LGBTQ health issues. He also saw the discrimination that LGBTQ members face from medical professionals, and decided that he would like to make a difference in the south, which sees a significant percentage of new HIV cases. He started wearing colorful rainbow shoes as an outward expression of pride, and dedicating many of his resident lectures to LGBTQ topics to better inform his colleagues. He applied for the LGBTQ fellowship program to gain a better understanding of how to provide culturally competent care to this community.

Upon completion of the UCLA Health LGBTQ Healthcare and HIV fellowship, Dr. Cates plans to join the Alamo Area Resource Center in Texas, as the first full time provider for the clinic. He is excited to move forward in his career and bring his training back to the south, where he hopes to make a difference in his community and the region as a whole.

Matthew Chase Cates, DO, MPH click here to update your profile
Back to search