Margaret Jones, MD, born in Maine in 1904, was one of the first women to graduate from Cornell Medical School in 1933, after teaching at Vasser College and working for the pharmaceutical industry in New York City. After a stint with the Wyoming Public Health Department, she arrived in Los Angeles in 1943 where she joined a pediatric practice, and then shortly struck out on her own, establishing the first childhood intervention program for cerebral palsy in Pasadena. 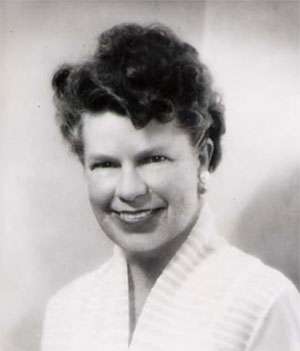 Later, Dr. Jones held academic positions with both USC and UCLA. She retired from UCLA as Professor Emeritus in 1972, and then started her second career continuing to serve with the UCLA Early Intervention Program. At age 80, she married a retired New York Physician, and together they established the Jones Kanaar Foundation, which awards scholarships to deserving but economically disadvantaged high school students.

In 1994 Dr. Jones joined the UCLA Center for Cerebral Palsy. At that time, she was conducting research to determine the functional status of adults whom she had treated at UCLA as children. The results indicated that many of the patients had significant medical problems that were not being adequately addressed. At her urging, the Center developed a program to address the needs of adults with cerebral palsy. Many of these patients remember Dr. Jones with fondness as their childhood doctor.

Dr. Jones received numerous awards and honors and was active in many professional organizations. She was an active member of the American Academy of Pediatrics, the American Academy of Neurology and the Los Angeles Pediatric Society, for which she served as Secretary, Vice President and President. She joined the American Academy of Cerebral Palsy and Developmental Medicine at their second annual meeting in 1948 and was elected their 6th president in 1956. Dr. Jones died peacefully at her home in Pacific Palisades Caifornia in 2001. Her legacy continues, as she created an endowment to the UCLA /Orthopaedic Hospital Center for Cerebral Palsy that will enable it to continue her vision for quality care for persons with cerebral palsy.