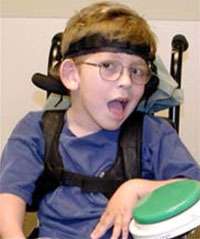 Spasticity –  may change with posture, position or effort. It may be mild and only appear during strenuous activity or it may be present all the time. Moderate or severe spasticity may hinder movement and function and can make muscles and joints tight, leading to contractures.

Hypotonia – is lower than normal tone, creating muscles that are “floppy”. Hypotonia may be seen in young infants with some forms of cerebral palsy, with spasticity or hypertonia manifesting as the child develops.

Dystonia – is involuntary, sustained, or intermittent muscle contractions that cause twisting and repetitive movements, abnormal postures or both. Dystonia can occur in the eyes, mouth neck, trunk arms or legs.

Athetosis – is slow, involuntary writhing movement of face and extremities. It often occurs with chorea, and is called choreo-athetosis.

Chorea – is brief, irregular jerking movements that most commonly begin in the shoulders, neck, trunk and face.

Weakness is common in cerebral palsy but is not always easily detected. Spasticity may mask weakness, making it difficult to fully assess. Weakness may be present in conjunction with spasticity and may manifest itself in gait deviations or difficulty performing activities of daily living.

This is the inability to recruit muscles with normal precision, speed or timing. When this ability is impaired, movement occurs synergistically. Synergistic movement is when motion at one joint, such as the ankle, cannot occur without movement at another joint, such as the knee. Impaired motor control may interfere with functions such as walking or holding a pencil.

Balance is coordination of sensory input and controlled, purposeful motor output. Falling may be the result of poor control of posture, the inability to move in response to surroundings or it may be caused by tripping over a foot that gets in the way.

When a joint, such as an elbow or knee, cannot move through its normal range of motion, it is said to have a contracture. Spasticity can cause muscles to be tight and develop contractures. Contractures may limit a person’s ability to sit in chair, stand up straight or open a hand.

These may include problems with eating, chewing, swallowing or drooling.

Problems with vision and perception

Visual acuity, or the clarity of vision, may be unaffected in cerebral palsy. Problems with perceptions, or interpreting what is seen, include discriminating contrast, depth perception or identifying shapes.