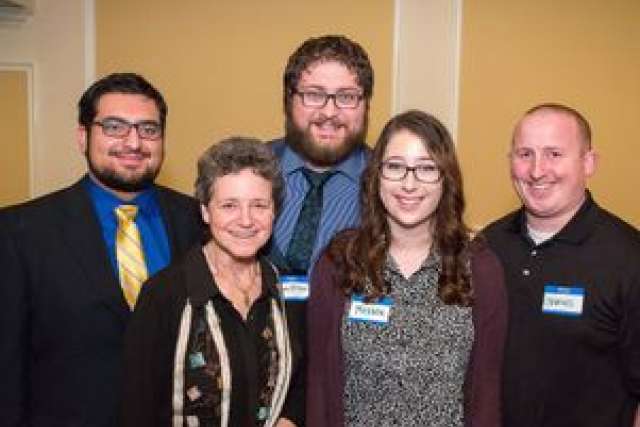 As UCLA undergraduates, brothers Jorge and Andrew Sincuir donated blood and platelets often. In fact, after Andrew learned that a patient responded well to his platelets, he began donating every two weeks, racking up 67 donations over four years.

When his concerned parents asked him to stop, Andrew pointed out that a specific patient relied on his platelets. His father replied that this person could get them from someone else. “If everyone felt that way, no one would donate,” Andrew told his father. “You’d feel differently if it was your son in the hospital.”

Sadly, Andrew and Jorge's dad learned that lesson the hard way. In a twist of fate, Jorge, Andrew's big brother, suffered a horrific car accident last April and nearly bled to death. Two weeks later, his father drove to UCLA from his Lancaster home to donate blood for the first time.

At an emotional event organized by the UCLA Blood and Platelet Center on Tuesday, the Sincuir family met three of the 27 people who had donated 50 units of blood products to save Jorge’s life.

“I never thought I’d need blood,” admitted Jorge, now 26, who graduated from UCLA with a degree in neuroscience in 2011. “Donating was something I did casually on my way to class.”

Standing in front of a phalanx of TV news crews and an audience of 60 invited donors, he added, “Thank you for being my heroes. I’m very grateful to be here.”

Jorge was driving in a heavy rainstorm when his car hydroplaned across Sunset Boulevard into oncoming traffic.  An SUV crashed into the driver side of his vehicle, leaving him bleeding heavily from a shattered pelvis, left hip and left arm. Paramedics extracted Jorge from his totaled car and sped him to the emergency room at Ronald Reagan UCLA Medical Center.

“Jorge was bleeding to death, but we didn’t know where the bleeding originated in his body,” recalled Dr. Henry Cryer, the medical director of the hospital’s trauma team who treated Jorge in the E.R. “We needed to track down and stop it before he lost half his blood and died. The only way to buy him time was by transfusing blood that donors constantly replenish in our blood bank.”

Reed Hutchinson/UCLA - With tears in her eyes, Ingrid Sincuir, Jorge's mother, thanks UCLA hospital security officer Charles Bolan for his donation of blood to save Jorge's life.

At 6-foot-4 and 280 pounds, Jorge’s large build required three grueling surgeries to reconstruct his bones. After his kidneys failed, doctors aborted his first surgery and induced a coma to stabilize him. When Jorge awoke three days later, his vision disappeared for a terrifying week.

During the course of his six-week stay, UCLA hospital staff transfused him with five gallons of blood, equivalent to five times his body’s entire blood volume.

“Most people donate without the expectation of their blood helping them or their family members,” said Dr. Christopher Ortiz, a UCLA critical care fellow at the time of Jorge's hospitalization. “Jorge’s case really illustrates that medical trauma can happen to any of us at any time.”

Bedridden at home, Jorge relied on the support of his family and his girlfriend, Alexandria, and the welcome distraction of Netflix for his recovery. His mother, Ingrid Sincuir, who emigrated from Guatemala with her husband when Jorge was 2, appointed herself his physical therapist and oversaw his rehabilitation. With her help, he slowly regained his strength and learned to move using a wheelchair, walker and cane.

At the donor event Jorge and his family met three of his donors — Cari Blitzer, a UCLA risk management consultant; Charles Bolan, a security officer at UCLA Hospitals System; and Melinda Green, a fourth-year physiology major. Eyes streaming, his mother hugged each one, murmuring, “Thank you, thank you.  For the rest of my life, I cannot thank you enough.”

“I had all sorts of good things to say until I met Jorge’s mom,” Blitzer said later. “She looked into my eyes and was so grateful that she started to cry. I started to cry along with her and forgot everything I wanted to say.

She added, “It’s just so wonderful to have the circle be completed and to see the results of donating.”

Jorge closed another circle when he returned to his hospital internship on Jan. 4. In yet another coincidence, he’s studying to become a clinical lab technician — the person who processes blood donations for patients.

Summing up his experience as a blood donor, patient and future medical professional, he said, “I think we all do have time in our lives to save a life.”