Distinguished professor emeritus of biological chemistry at the David Geffen School of Medicine at UCLA awarded for groundbreaking research on gene expression. 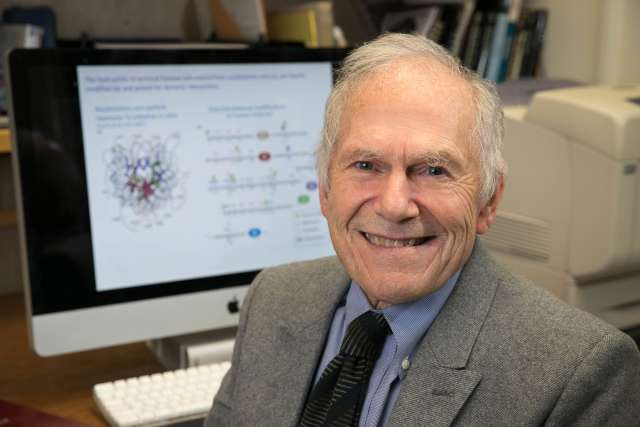 Michael Grunstein, distinguished professor emeritus of biological chemistry at the David Geffen School of Medicine at UCLA, has been awarded the 2022 Albany Prize for his groundbreaking research on gene expression. He shares the award with C. David Allis of Rockefeller University in New York.

Working with his team at UCLA, Grunstein provided the first demonstration that histones — the proteins that package DNA within chromosomes —play an important role in gene expression and are not simply structures that serve as spools for DNA.

Gene expression is often described as the on/off switch for genes, determining how the information encoded in a gene is converted into proteins and other molecules that are key to the development of every process in the body.

Dr. Grunstein’s work leading to greater understanding of histones' role in this process provided a deeper insight into both normal and abnormal development, creating new avenues for research and treatment. Throughout most of his career, Grunstein was a researcher with UCLA’s Molecular Biology Institute and Jonsson Comprehensive Cancer Center, before retiring in 2016.

Born in Romania to Holocaust survivors, Grunstein moved to Montreal, Canada, as a child. He earned an undergraduate degree from McGill University in Montreal and a PhD from the University of Edinburgh in Scotland. He did his postdoctoral training at Stanford University in Palo Alto, California, where he invented the colony hybridization screening technique of recombinant DNAs in the lab of David Hogness, an influential biochemist, geneticist and developmental biologist laboratory.

Soon after coming to UCLA in 1975, Grunstein and his team pioneered the genetic analysis of histones in yeast, showing for the first time that histones are regulators of gene activity in living cells. They also showed that the presence or absence of a particular chemical group, known as an acetyl, at certain spots within histones helps turns the genes on and off.

Allis, with whom Grunstein shares the award, discovered that an established gene co-activator can add acetyl groups to histones and that this modification is crucial for efficient gene expression. His findings sealed the connection between histone modifications and genetic regulation. Grunstein and Allis won the 2018 Albert Lasker Basic Medical Research Award for their work.

The Albany Medical Center Prize in Medicine and Biomedical Research was established in 2000 and is awarded to a physician, scientist, or group whose work has led to significant advances in health care and scientific research with demonstrated translational benefits for improved patient care. Its purpose is to encourage and recognize extraordinary and sustained contributions to improving health care and promoting innovative biomedical research.

“Albany Prize recipients are among the most distinguished and accomplished in their fields, renowned for their significant contributions to science and medicine,” said Vincent Verdile, MD ’84, dean emeritus of Albany Medical College and chair of the National Selection Committee, who presented the prize. “Drs. Allis and Grunstein are no exception. Their seminal work elucidating the role of histones in gene expression has been key to the development of new ways to study and treat cancers and other diseases, including leukemia, pediatric glioblastoma, sarcoma, congenital heart disease, and neurodevelopmental disorders like Rett syndrome and autism.”