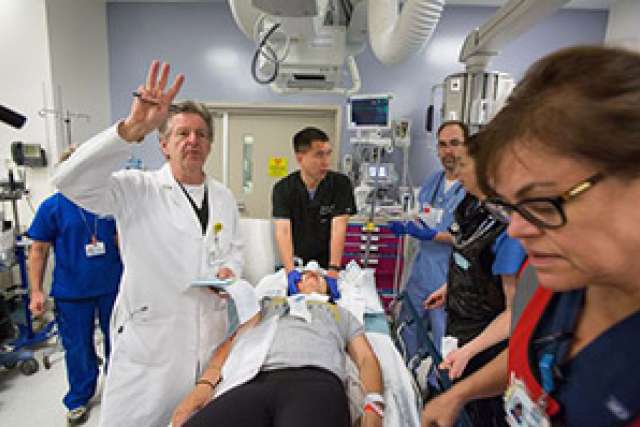 Monday was anything but a slow start to the work week for 150 UCLA staffers from 28 different departments at Ronald Reagan UCLA Medical Center.

At 8:55 a.m., the first patient injured in a plane crash at Los Angeles International Airport was wheeled into the Emergency Department. The 25-year-old man was moaning in pain and bleeding profusely from several open fractures. His blood pressure was dangerously low.

By 9 a.m., more plane crash victims began arriving by ambulance — an unconscious woman with head wounds, a young man with bleeding gashes and a high heart rate, a youngster with a gaping knee laceration, a woman with third-degree burns over 40 percent of her body, a crying patient with broken ribs having trouble breathing.

Soon the trauma rooms were filled, and patients with less serious injuries were lying on gurneys that quickly began to line the hallways as they waited to be evaluated.

While the actions being taken were those that would occur in a real mass casualty response at UCLA, in this case, the 50 bruised, bloodied, broken-boned and burned patients that came through the Emergency Department were part of a scheduled disaster drill.

“This drill was designed to imitate a large-level disaster, resulting in serious injuries and many patients being transported to UCLA,” said Dr. Lynne McCullough, director of the Emergency Department. “From the initial call, we did everything as realistically as possible. This is what we do every day of the week, but we have these drills so we can look for potential weaknesses that we can fix. We want to ensure we have order out of the chaos.”

The fictional crash and resulting injuries in the drill mimicked the Asiana Airlines crash two years ago at San Francisco International Airport. Receiving 50 patients within one to two hours is a challenge, so the four-hour drill was a good way to spot areas that could be improved upon.

UCLA holds large-scale disaster drills about once a year, and smaller drills more often. For this drill, a triage area was set up outside the hospital to serve as the first line of contact with patients being transported to UCLA. From here, the severely injured were sent directly to the Emergency Department for immediate care. Those awake and breathing on their own with less serious injuries were put on cots set up near the ambulance bay to await treatment after the severely injured were cared for. Those with minor injuries were sent to a third area, where their wounds were attended to as needed.

Tables at all three triage and treatment areas were stacked high with gauze, bandages and other medical equipment. Wheelchairs stood at the ready for those who could not walk on their own.

The injuries looked scarily real — with makeup provided by students from the Cinema Makeup School. Of the 50 volunteer “patients” in this disaster drill, 13 needed immediate help in the Emergency Department. Four later went to the Intensive Care Unit, while two were taken to operating rooms.

“A drill like this allows our staff to operate in a chaotic environment,” said Kurt Kainsinger, director of the UCLA Office of Emergency Preparedness. “You can have the best disaster plans on paper, but until you do a drill, you don’t have the opportunity to learn what really happens in a fast-moving situation like this. We live in a hazard-prone environment. We treat victims of train crashes, mass shootings, multi-car traffic accidents. You never know what you’re going to get in a level one trauma center.”

Dr. Rick Harrison, UCLA chief medical officer, said the drill provided staff with a real-world situation where they had to deal with many new patients while maintaining care for the real patients already being treated in the Emergency Department.

“The hospital and staff responded extremely well,” Harrison said. “We are prepared to provide excellent care in the event of a disaster.”

The hope is that practice, as the saying goes, makes perfect, said Dr. Mark Morocco, a professor of emergency medicine and the attending physician in the Emergency Department.

“In a scenario like this, we need to evaluate and treat patients in a rapid fashion,” Morocco said. “Today we proved our system is capable of taking care of a large number of severely injured patients.”

Dr. Gill Cryer, chief of trauma at the hospital, agreed. “We learned that all our efforts to prepare for disasters are worthwhile. We were able to take care of every patient we were sent and we did not get overwhelmed.”