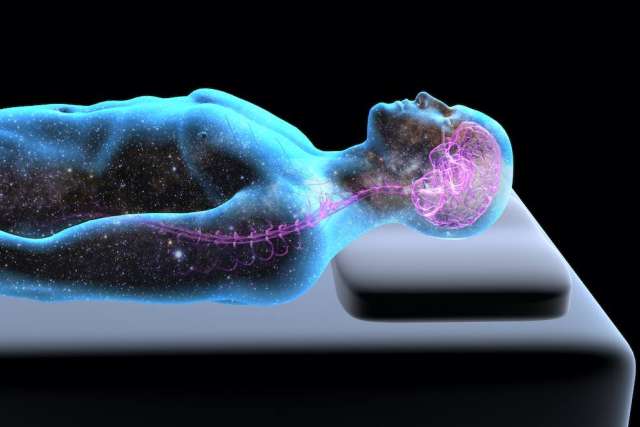 Researchers at UCLA are buoyed by the results of a study in mice on the relationship between sleep and migraine they say could lead to new therapies to treat migraine as well as other brain disorders and injuries.

The study, co-authored by researchers from the UCLA Goldberg Migraine Program, looked at a specific mechanism of brain activity called cortical spreading depression. CSD is a wave of brain activity responsible for migraine aura — a warning symptom such as visual disturbance or flashes of light that often occur before or with the headache.

“CSD has been commonly used as a model of migraine in mice or rats because it is something that seems to be predictive,” says Andrew Charles, MD, a professor of neurology at the David Geffen School of Medicine at UCLA and a co-author of the study. “Not only can it tell us about the mechanisms of migraine, but it seems to be predictive of therapies, meaning things that suppress it are generally helpful as preventive treatments, whereas things that trigger it may be things that trigger migraines.”

Dr. Charles notes there is a complex bi-directional relationship between migraine and sleep, but the basic mechanisms are poorly understood. On one hand, he says, an attack often can lead people to go to sleep, partly because sleep can be beneficial to migraine.

Conversely, chronic migraine wreaks havoc with the sleep-wake cycle, so the normal sleep rhythm is disrupted, which also can trigger migraine.

“So, if you sleep too little or too much, that’s commonly identified as a migraine trigger,” says Dr. Charles, who is also a member of the UCLA Brain Research Institute. “For those with frequent migraine, it becomes a vicious cycle where the migraine causes sleep disruption, which then turns around and further exacerbates the migraine.”

Dr. Charles and the other co-authors of the study — Dmitri Yousef Yengej, PhD; Sinifunanya Nwaobi, MD, PhD; Isabella Ferando, MD, PhD; Gayane Kechechyan and Guido Faas, PhD — have been studying the phenomenon of CSD for some time; however, in order to trigger and record it, typically the mouse had to be under anesthesia — an artificial situation that changes the interpretation of the results, Dr. Charles says.

Enter Dr. Faas and Dr. Yengej, who have developed a minimally invasive microchip system that monitors and records brain activity and behavior in freely behaving mice.

“Dr. Yousef Yengej likes to describe it as a Fitbit for mice, where we’re recording different kinds of parameters like brain blood flow, head movement and multiple other physiological and behavioral parameters in freely behaving mice over weeks,” Dr. Charles says.

What that means is groundbreaking in terms of yielding new information, not just about migraine but about brain function in general, he says.

“This approach completely changes our ability to assess effects of different sorts of phenomena in the sleep-wake cycle in these freely behaving mice,” Dr. Charles says. “Apart from migraine, they’ve discovered extraordinary things going on during sleep in mice. And that includes in REM sleep and other phases of sleep.”

In addition, Dr. Yousef Yengej and Dr. Faas have built a light trigger in the microchip system that activates cellular channels in mice called channelrhodopsin, a technique widely used in neuroscience to turn a specific cell on or off by shining light on it.

“When the mice are expressing this channelrhodopsin in specific cells, we can trigger this phenomenon of CSD through the intact skull of an awake or asleep, freely behaving mouse. The same chip that’s doing the recording of brain blood flow and movement can also trigger brain activity — in this case, cortical spreading depression.”

The goal is to apply what the researchers have learned about mice and sleep to humans, he says, which could have implications for preemptively treating migraine as well as understanding why migraine is more common, easier to trigger, harder to treat and more significant during sleep.

Migraine and other forms of severe headaches are disabling disorders of the nervous system that affect hundreds of millions of individuals worldwide. About 25% of adult women suffer from migraine, Dr. Charles says, while migraine prevalence in men is in the range of 8-10%. Interestingly, he notes, the prevalence of migraine in children is equal in boys and girls.

Migraine is one of the top 10 causes of time spent disabled across the globe, he says. “While it’s not lethal, it’s a problem that, especially if you add up the days spent disabled over a lifetime — even for those with infrequent attacks — it adds up to a year or two off your life in terms of the time you’re not able to function normally.”

Although the cause of migraine is not definitive, scientists know that, in many cases, it has a genetic basis. Through functional imaging studies, they’ve learned that different brain regions light up with abnormal activity during a migraine attack; they’re beginning to understand and visualize patterns of brain activity that underline migraine, and they’ve also identified some of the chemicals that are released during an attack, including CGRP (calcitonin gene-related peptide).

Significant advances have been made in the past five years with the development of migraine-specific therapies that target CGRP, Dr. Charles says.

“We still don’t know what causes the release of CGRP, and we don’t know how the genes that are involved actually cause migraine,” he says. “But we’re getting closer and closer.”

Interestingly, Dr. Charles adds, the person who identified CGRP as a fundamental cause of migraine and who was responsible for many of these therapies — Peter Goadsby, MD, PhD, DSc — recently joined the faculty at UCLA and is actively contributing to the work of the migraine program.

In addition to understanding the relationship between sleep and migraine, Dr. Charles calls the technology an “enormous breakthrough for all kinds of research.”

For example, he says, the technology could be applied to study sleep disorders, pain disorders and, potentially, even brain disorders such as Alzheimer’s disease.

“One hypothesis about Alzheimer’s is that poor sleep leads to poor clearance of toxins that might build up in the brain,” Dr. Charles says. “One of the functions of sleep is believed to be clearance of those toxins and other things that aren’t good, in general, in the brain. We’re quite interested in looking at models of Alzheimer’s disease in mice to see if their sleep is affected in a way that informs us of that particular situation.”

Additionally, Dr. Nwaobi is studying sleep deprivation to see how it affects migraine, he says. She also is among others in the group focused on caffeine and how it works, not just on migraine, but also on the sleep-wake cycle.

In terms of migraine-specific findings, Dr. Charles says the study is a significant step forward and something UCLA researchers are pursuing on many different levels.